Creator
Robertson, Mel, Author
Media Type
Text
Item Type
Articles
Description
From the 1970s through the 1980s, Mel Robertson wrote many articles for the Burford Advance and Burford Times on the history of Burford Township. This clipping contains the article Sounds of a Summer Morning describing children's summer time activities in Burford in the 1920s. The article may not have been republished.

SOUNDS OF A SUMMER MORNING

By Mel Robertson Sounds of a Summer Morning

During my attempts over the years to chronicle the activities of 1920s Burford boys I seem to have missed an unusual and completely pointless event. I refer to the practice of getting up at, or before, dawn that took place several times each summer. This was a happening that was typical of many things in the life of a 1920s Burford boy - it was completely spontaneous, pointless, and irrelevant to anything else in our lives. It required nothing to carry it out. it cost nothing and needed no supervision from adults. All that was needed to start things rolling was for someone in a group of 8- or 9-year-old boys who had gathered under a King St. lamp-post, to say Let's get up at 5 o'clock tomorrow ". This broke the monotony of our existence and we greeted the suggestion with enthusiasm.

Monotony is a poor word, I suppose, to describe a boy's summer life in the 1920s. Maybe the word 'routine would be a better description for we followed a certain routine as soon as school was out. During the day we lived at the creek learning about animals, fish, reptiles, the ways of Nature, how to swim and how to protect ourselves from the elements. In the evenings we stood under street lights, rassled, threw wild cucumbers at each other and played games such as Red

Light (not what you might think) on the lawn in front of the Royal Bank. When we became bored with these activities we discussed Brantford circuses, local garden parties, fish we had seen (but never caught), the 40 mph speed of our father s Studebaker or the big. black Hudson touring car of Burford's boot-legger. Sometimes conversation died and that was when someone would suggest the early morning caper. There was a certain challenge in getting up at 5 a m. as that was not a time or rising for village boys at any time of the year. It was a time for seeing what happened at such an early hour without having to worry about going to school. Dawn was a mysterious time. Parents used to talk about the crack of dawn and we wondered if there really was a funny noise when the sun came up. Such a silly belief may seem ludicrous to the electronically trained 9-year-olds of 1988 but in the 1920s when there were no computers, no software, no interstellar modules and before a used car1 had become a preowned motor vehicle- kids were unstructured and prone to believe what they read in Maggie and Jiggs or the Sunday school papers. Nobody told us what to think in the 1920s and even if we didn't think too deeply or "interface1 with each other, at least our thoughts were our own and not those dictated as 'communication" by the public relations person of some manufacturer of a crappy gadget (batteries not included).

No events were planned to celebrate the 5 a.m. rising and apart from the fatuous boasting as to who would be up first we left everything to chance. Complete chaos ruled our minds as we rushed home, washed our feet and went to bed. Alarm clocks were not needed for every boy had a built-in alarm system that was set by repeating. 5 o'clock several times during " Now I lay me down to sleep.

When 5 o'clock came you were the first kid on the dimly lit street, where, to your dismay, you found that the very boy who had suggested the early rising had not bothered to get up. Sometimes, as an ultimate weapon>> you shouted his name until windows flew up and night-shirted parents leaned out to roar Shad-dap1 or something suitable to the situation. If no one arrived to keep you company you had a chance to enjoy the early sounds of a summer day.

What were the sounds of a 1920s summer morning and why did they differ from the sounds of a similar morning in 19889 They were different because in the 1920s the sounds were pastoral whereas in 1988 they would be mechanical. In the 1920s there was no early morning traffic on King Street other than the milkman and his ambling horse. No 28-wheel diesel outfits were warming up and the hum of the air-conditioner and the irrigation pump was not heard in the land. The only sounds to break the silence of a 1920s summer dawn were the mooing of cows from nearby farms, the barking of the dogs that were rounding them up and the faint, but clear, echoes of farmers' voices calling soo Boss to bring the cattle in for milking. Near at hand the voices of village cows and dogs were added to the chorus. It was a merry chorus all right, but it lacked one thing - the blowing of a bugle from the Luard farm east of the village (now A. MacKenzie fan). This bugle call was meant to summon the men from the barn but to the little listeners on King St it had a different meaning.

What was so exciting about a bugle blown on an early July morning. Was it a military call such as the local Dragoons managed now and then7 Was it "Reveille'.

Charge', 'Come to the kitchen door Boys' or 1 Lights Out ? No. it was probably only a few notes put together as a breakfast call. However, to the little boys shivering in the early chill of sunrise, it was full of imagination from the books we read.

In the 1920s little boys lived a life of deprivation. There were no comic books to tell us how to murder our friends, how to destroy the world, or how to jump off a 50-story building safely. Lacking this "meaningful1 knowledge we had to be satisfied with books

SOUNDS OF A SUMMER MORNING

about Knights, dragons and people blowing bugles. Knights were the good guys in King Arthur and the bad guys in Robin Hood. They were portrayed as big, blond, men of high moral character who went about in shining armour (it had to shine) rescuing damsels (who's that again?) and, or course, killing dragons. When they weren't doing this they were praying in monasteries and blowing bugles from castle walls. Knights never walked, slept, or needed a shave but sped around all day on snow-white steeds whose I.Q.s were probably better than those of the knights, yes, those knights were pretty good guys, particularly if they could get more than flatulence out of their fancy bugles.

We were too young to know that most real knights were miserable S.O.B.s who only rescued maidens of their own social class, who killed, without a second thought, anyone who wasn't a Christian, who put sponges in the seats of their tin pants so they would not have to dismount if taken short and who seldom did any useful work. No, we thought that Sir Galahad spent most of his time praying in church and did not know that Sir Lancelot, our paragon of gallantry, expended much of his strength "chatting up" other knights' wives. Since we were unaware of the sordid facts of history the early morning bugle call made us look around for damsels in distress and dragons to slay. However, all the girls were too smart to get up at 5 a.m. and all the Bur-ford dragons were sleeping it off at the local boot-leggers'. Nonetheless, a bugle call was a bugle call and no matter if it was only one to summon the men to breakfast it made getting up early worthwhile.

So what did we do after the echoes of the bugle call had died away? Well, we stood around a lamppost and talked about Brantford circuses, local garden parties, fish we had seen (but never caught) and how about getting up at 5 a.m. some morning. 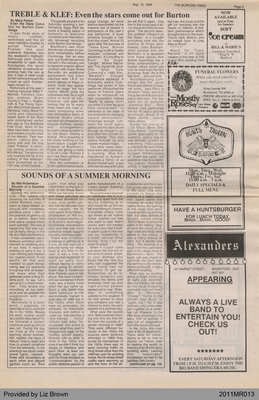