Creator
Robertson, Mel, Author
Media Type
Text
Item Type
Articles
Description
From the 1970s through the 1980s, Mel Robertson wrote many articles for the Burford Advance and Burford Times on the history of Burford Township. This clipping contains the article A Christmas Fairy Tale. The article may not have been republished.

Once upon a time in the dark at the top of L an attic stair there stood a cardboard box. It was not much as cardboard boxes go. It was big and square with the name "Miner Rubber Company" printed on one side and an address on the other that everyone had forgotten. However, it was very important to the family for in it was stored all the Christmas Tree decorations they

had saved over the years. There were glass globes of every size and colour, little faded red Santa Clauses, folding Christmas bells, silver icicles, celluloid reindeer, Japanese lanterns, tiny cardboard sleighs, ropes of red and green fringe and (until the mouse

came) string of homemade popcorn. There was also a homemade Christmas Star for the top of the tree and a number of other trinkets which, if examined closely, had

nothing to do with Christmas but which had pleased some children at some time. In the bottom of the box was a jumble of broken ornaments, old paper flowers and other things that were no longer used on the Christmas Tree but which no one had taken the time to throw out. Among this jumble was a red tin box with the words "Christmas Candles - 3 Do/en" printed on it and in the box was the last Christmas Candle.

This was a box of Christmas Tree candles that had been bought many years before. The candles were little spirals of red and white and every Christmas about a dozen were brought out and fitted into metal holders that snapped onto the tree.

There they sat waiting for Christmas Eve when they were lighted for a brief moment before the children hung up their stockings and went to bed. Then it was a jolly time

stood by and recalled the Christmases of their childhood. Everyone was happy then except the father who stood in the dark with a pail of water poised in case someone knocked over a candle and set the tree afire. Then after a short time the children ran off to bed and the candles were put out not to be relit until Christmas night when they had another brief moment of splendour. Thus, not much of the candles was burned each year and one set lasted for several years until they became too short for further use. So after many Christmases the stock of candles had been reduced to one, the last Christmas Candle.

Now it may be thought by adults that Christmas toys and candles are merely material things without any life of their own. However, among young children these things are part of their own little world and have any life that imagination can produce. And so the tiny candle sat in its little tin box and recalled the time when all the candles had first entered the family Christmas scene.

It had been a day to remember when the tree was put up in the parlor and all the decorations had been hung on it. Last of all the box of candles was opened and they were put on the tree. Then when the family had gone to bed the other ornaments began to talk to each other. "Who do you think you are, asked the silver ornament and what can you do? I can shine and sparkle and you can do nothing". "What sound can you make, said the little bells, we can jingle and you can do nothing?" "What do you pretend to be?" inquired the reindeer. "You don't look like anything we have ever seen." But the candles said nothing although one whispered to its companions "Wait and See". Then on Christmas Eve when the candles were lit all the other decorations said "Oh" and when the candles were put out they said "Well you didn't amount to much" and the candles felt bad because they had not added much to the celebrations.

But the next Christmas when the candles

were lit the other ornaments said "Not Bad" and the year after that they said "Wow, just look at that". From then on the candles felt proud and said "We are the best ornaments on the tree and don't let anyone forget it". For a few years this was fine until one year the father brought in a small cardboard box and from it he took a string of six little electric lights. One was shaped like a balloon, another like Santa Claus, a third like a bunch of grapes and the rest were shaped like anything from a plate of scrambled eggs to the Japanese version of a reindeer. He hung them on the tree and when he lit them the candles said "Who do you think you are?" and then felt foolish when they remembered that the other ornaments had said the same thing when they first appeared on the tree. They felt even more foolish when, after the lights were put out, they said "Well you didn't amount to much" and the other ornaments said "Haven't we heard that expression somewhere before?" And so it went on year after year with the father adding more electric lights to the tree and the candles felt less and less important. However, the candles still had a place on the Christmas Tree even though their number was decreasing. Then the father added ornaments that made music, birds that chirped a tune and balls that talked and sang "Rudolph the Red-Nosed Reindeer" or "White Christmas". Now even the electric lights were made to feel inferior and as for the candles they were soon reduced to one last candle that lay in the little box and wondered if the children still remembered it.

me" said the last Christmas Candle but just then the youngest child came in and said "Can't we have just one real candle?" and the last candle was put on the tree and lighted. "How can I compete with all that light ? " said the candle and it began to burn as bright as it could while all the children shouted with joy and clapped their hands but when the father saw the candle he said "WE don't need that candle any more and besides it may set the tree afire". So he took the candle from the tree and going to the back door he threw it into the little woods at the end of the garden. It fell into the branches of a small fir tree and smouldered there. "I tried my best, it said to itself but I guess that wasn't good enough. I hope they all have a Merry Christmas". And so it flickered until very late on Christmas Eve when all was still and the frost crackled in the snow-covered bushes. Suddenly a little wandering wind came by bearing with it a little cloud of the purest snow-flakes and in the cloud was a faint ball of light. "Who are you?" asked the candle and a gentle voice from the cloud replied "I am the Light of the World". "You aren't very bright" said the candle and the voice replied "Sometimes it is very hard to be bright when so many people have forgotten me". "Can I help you?" asked the candle and the gentle voice said "Thanks". On hearing this the tiny candle flared up and all the creatures of the woods gathered round and enjoyed its light and warmth.

Then just before the dawn of Christmas Day the little wandering wind came back and caught the tiny candle up into the sky where it became the brightest star of Christmas morning.

The children creeping downstairs to see if Santa Had come saw the new star and shouted with joy waking their parents who hadn't planned to get up so early. 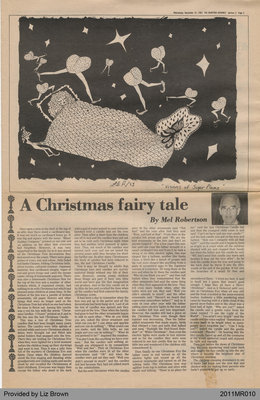