Creator
Robertson, Mel, Author
Media Type
Text
Item Type
Articles
Description
From the 1970s through the 1980s, Mel Robertson wrote many articles for the Burford Advance and Burford Times on the history of Burford Township. This clipping contains the article Another Chapter Begins describing the history of newspaper printing in Burford. The article may not have been republished.

The following history of The Burford Advance and newspaper printing in Burford has been thoroughly and painstakingly prepared by Burford's own local historian, Mel Robertson.

Due to the length of the history, it will printed in segments in consecutive issues of The Advance, in order that all our readers may be more fully aware of the long and colorful history of community newspapers in Burford.

The Advance staff appreciates greatly the time and efforts of Mr. Robertson in researching this history that has enlightened us as we are certain it will you. THE ENDLESS STORY BY MEL ROBERTSON

The recent change in ownership of "The Advance" marks another chapter in the long history of newspaper printing in Burford.

While there is no evidence of any form of newspaper in the early days, considerable information about Burford happenings can be gleaned from the Dominion and Provincial Archives as well as from church and university records. However, most of this records separate incidents and does not convey the continuity and community feeling that is found in a weekly newspaper.

which appeared in the 1860's. Both were well-named and it is difficult to classify them as newspapers or even as serious news-sheets. However, if we consider the scandal-laden tabloids that crowd the check-out points of many stores these days, as newspapers, I suppose that our two local "rags" had a place in the community.

"The Rattlesnake" or "Daniels Larry's Mouthpiece" crawled from beneath a rock on July 1869. The publisher "Daniels Larry" announced that the paper would appear monthly and that "All communications not anonymous, must be post-paid or they will not be taken from the (post) office."

It would appear that the publisher himself wished to remain anonymous for no "Daniels Lawrence" or "Daniels Larry" appears in the Brant County Gazeteer of the day. However a "Lawrence Daniels, Esq, J.P." is listed as living on Concession 5, Lot 2 of Burford Township. Mr. Daniels was a prominent resident of the community and obviously not the sort of person who would edit a paper like "The Rattlesnake". Therefore, it would seem, in all likelihood, that "Daniels Lawrence" was someone who had been brought to book by Lawrence Daniels, J.P. and was using "The Rattlesnake" to get back at him. For example,

"The Rattlesnake" of July 4th, 1869 contains "a letter to the Editor" from someone in Scotland who signed himself "P. Layden". In this it was said that "dear Larry", acting in his capacity as Justice of the Peace, had visited a religious camp-meeting in Burford Township and had fined the operators of seven liquor outlets the sum of $3.50 each. It is interesting that the name "P. Layden" does not appear in the Gazetteer and since the writer also called himself "The Walking Bar-Room" one has to suspect that the name is either a misspelling, a pun, or a non de plume.

The quality of newspaper reporting in "The Rattlesnake" never rose above the despicable and in the same issue and imputations against such prominent local men as "Col. Purley", "Capt. Mure" and "Squire Henry Townsend" were published, which, in spite of the misspelling, would seem to be unkind and libellous.

The only Burford advertisments in "The Rattlesnake" were one for "The Western Hotel" which stood east of the main corners in Burford and one for Ben Jones' store. The hotel ad described the owner F. Corrigan as "The Village favorite" and summed up the standards of the inn with the words "Come boys, come up and drink" which just about says it all. Ben Jones' emporium was described as "the Ladies store" where "Ladies can save 10

cents on the dollar for every item purchased". Out-of-town ads were confined to a couple from Mount Vernon one of which boosted the amenities of Francis Johson's "Strangers Hotel" while the other praised the products manufactured in Francis Johnston's "Mt. Vernon Carriage and Wagon Factory".

"The Snapping Turtle" and "The Rattlesnake" were vicious bedfellows who received (and deserved) short lives. One has to suspect that their brief existence was due either to a lack of news, a lack of nerve, the threat of litigation or the unanswerable logic of a "swift kick" in the backside. It is hard to understand how either of these "rags" saw the light of day but when we consider them with other publications of their time we must conclude that a different sense of humor and propriety existed in the 1860's than is evident today. A number of similar local examples can be quoted; chief of which was the broadsheet of August 5th, 1867. This was circulated widely and accused a former Burford doctor of such quaint peccadillos as murder, arson, fraud, perjury, seduction of women, juvenile delinquency, etc. If we use this broadsheet as a criterion it would seem that the Burford scandal sheets were in keeping with the times.

End of Part One 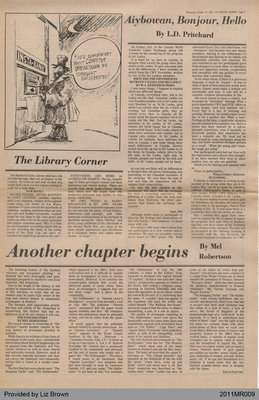