The original document is held by the South Dumfries Historical Society.

I enclose you copy of a letter which I was very much surprised to receive this morning from Mr. McMaster. I have ceased to take touch interest in the matter, but I think this letter should be dealt with by the Committee. It seems to me the proper coarse would be to call the Committee together. I have never had anything to do with the monies which were collected, and have no knowledge whatever in regard to them.

I beg to report noir having made some progress in the suit of Addison vs. the Directors. I have examined Mr. Dinnick on two or three occasions, and finally jot production, not of the Minute books, but of correspondence with the Trusts & Guarantee Company in which he, himself, over his own signature, authorized the issue of, something like $500,000 of the bonds in question to the contractor, Drill. Mr. Dinnick admitted that this was done before there was any work to justify it, justifying it under the clause in the contract which you will remember was thought so improvident, that is the clause as to the contractor becoming entitled to bonds for work done or contracted to be done.

Mr. Dinnick also admitted that no security was taken from Drill, that the Directors took Drill just on the word of Verner that at that time the directors had turned over everything to Verner, and that all the shares the directors then had were shares that Verner allowed them to have to qualify them, and it appeared to me that it almost made them Verner’s men.

The examination is further adjourned, and the Trusts & Guarantee Company have been written to giving them a list of documents and papers that we want to enable us to go on.

on, as to the other matter, the moneys in the hands of the Trusts & Guarantee Company, 1 beg to advise you that last Friday an order for the payment of this money into Court was finally settled, and has, I believe now been issued, and something like $60,000.00 is going into Court at once, so that, at last we are beginning to get this thing moved along.

Mr. Brewster of Brantford took a lot of trouble with the latter branch of the Grand Valley matter. We had great difficulty with Watson at first, and subsequently a certain amount of difficulty getting Kr. Laidlaw, K. C. satisfied, but after repeated negotiations we got the matter into what seemed like satisfactory shape.

I would like very much now, on account of this litigation, the case being now set clown on the list .for trial and a considerable sum haying been spent examining Mr. Dinnick, to have a cheque for, say, $ 250.00 on account of costs.

I think the money in the Bank of Ottawa that was collected from the bondholders for the purpose of this litigation is either in the name of Mr. Owen, who was then Manager of the Bank, and a member of your Committee, or else in the name of the whole Committee. Mr. Owen will know. To aid you kindly take it up with him and arrange to get us a cheque. 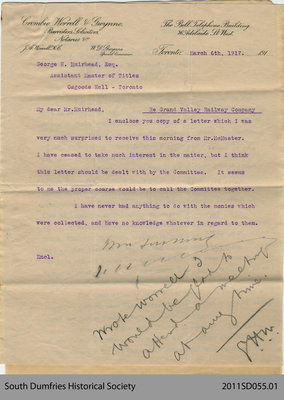