I suppose you have been thinking that you were not going to hear any further from me in the Grand Valley Railway matter* The enclosed letter which I received lately from A. C. McMaster will show that I have been poking at him now and then and it would appear by this letter that I have disturbed his equanimity to a slight degree at all events

had put up their money for nothing*

I d* not see why Watson and Company did not move to dismiss the action long ago. However, the case is now set down for trial-so Mr. Harley of the Central Office informed me last week but the difficulty now is that in the lion-Jury Court there is always such a long list of cases ahead that it may be sometime yet before this case is reached. It looks from McMaster1s letter as if he himself had lost the extracts which he made from the Company's lost Minute Books as he says he has finally found these extracts. He still promises that he is going to spring a surprise on the directors but if I were you I would not allow my hopes to rise too high.

As to the other branch of the matter which Mr. Brewster is handling saw George Heyd down here the other day and he had just finished the taxation of Watson & Company's long bill of costs, having been at it he said three days so I 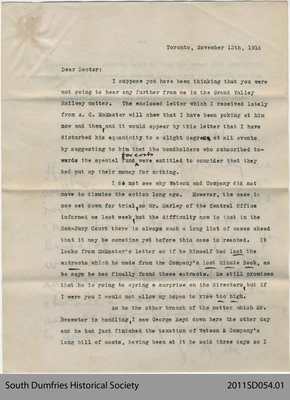