Media Type
Text
Item Type
Documents
Description
This documents represents a copy of the Judgment of Falconbridge, C. J. K. B., delivered on September 10th, 1918. The case was tried at Toronto.

W. S. Brewster K.C. for the bondholders under Mortgage of 1902

of 1902 who have not exchanged their bonds.

A. C. McMaster and J.H. Fraser for bondholder of 1902 mortgage who did exchange their bonds and took bonds of 1907, now seeking to be reinstated

The evidence and arguments have been extended, wherein the facts and contentions are fully set forth.

The issues for trial are stated in a consent order made by me dated 29th May, 1917, as follows,

Set out last paragraph of p. 2 of Record.

Ext. 1, purports to be a concise statement of the issue to be tried.

Ext. 40, The money in Court is identified by paragraph 5 of an order of my brother, Latchford, bearing date 1st March,1917, as follows,

Ext. 2. The Mortgage of 1902 covers the railway owned by the Company constructed or thereafter to be constructed… and all charters, franchise &c. … now owned or possessed … or to be hereafter acquired by it.

Ext. 3. The Mortgage of 1907, reciting the issue if bonds under exhibit 2, is made subject to the lien priority and charges in favor of outstanding first mortgage bonds.

The transaction entered into by W. S. Dinnick and other directors claiming also to be unsecured creditors of the Company to the amount of $ 100.000 with Verner and Drill, was a most extraordinary not to say an outrageous one. The details of it are set out and they are of so improper a nature as to disentitle Dinnick or any other director who took part in it to rank on the assets of the Company as coupon holders or by any other aspects of claims.

As to the other 1902 bondholders who exchanged for 1907 bonds, the evidence is quite clear that they did so on the false and fraudulent representation that all the old bondholders either exchanged or had had agreed to do so, and I am of the opinion that I have jurisdiction under the Order to try to this matter nor any questions except those which are set therein. The parties for the disposal of this issue are not all before the Court. Therefore, although I have no doubt as to the merits, I cannot order the reinstatement of those who so exchanged their bonds.

AND AS TO the coupon holders in any event, I am of opinion that the effect of the transaction is that those coupons were paid and extinguished, not sold or transferred in such a way as to preserve a lien, and cannot now rank in priority.

The Company paid the coupons on the Exchange bonds of 1907 until 1910. The holders of these bonds did not then repudiate the transfer nor offer to pay back the money.

All the claims put forward with the bondholders under the mortgage of 1902 are disallowed and these bondholders (having a clear priority) are declared to be entitled to the money in Court.

The trial and determination of the claims are in the nature of an inter leader and I make no order as to costs thereof. 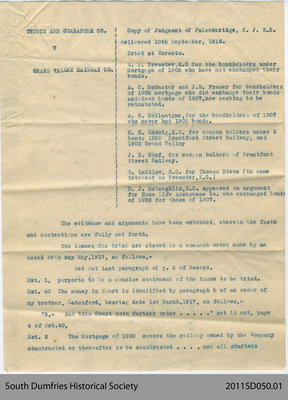