Media Type
Text
Item Type
Documents
Description
This correspondence relates to the bondholders of the B. Bell & Son Company.

Re B. Beil & Son Company

We received the remainder of the papers from

Mr. Conant this morning and Mr. Bowling game over to the Office and he and the writer signed them all, so that there is no other signature required but your own.

As I think I told you the other day I am

starting off to-morrow morning for a couple of week and there is no need for you to bother about your signature until my return.

I am writing to Mr. Gonant to this effect and also writing to Mr. Cornell to let him know that he will get his copy of the Agreement as soon as I come home.

I am very glad that we got along so well at

your house the other morning, as we will now be able to get the Surrender of the Charter of the old Company as we have desired to do.

I have heard from Mr. George

Patten, who said he would drive home by way of St. George last Saturday he and Mr. Dowling, writer pretty well agreed on the best course to pursue in connection with the Bell Company business. The idea is to make a Deed of the property over to yourself, Mr.Gonant and the writer and then to take a separate agreement from the three of us setting out that we hold the property and the proceeds of it whenever received either from Mr .Cornell or any other purchaser on behalf of the parties interested in the old Bond issue.

I think it would be well for you and Mrs. Griffith to come in the beginning of the week and we will go over the papers together with Mr. Dowling. On second thought it was decided that it would be better not to have either George B. Patten or Mr. Dowling as Trustees Personally I would much prefer to leave it with you and Mr. Gonant, but he seemed to think I should stay with the thing until we get it into shape.

You might telephone before you come out so that will be sure that Mr. Bowling will be here*

You are, of course, already aware that Mr. Cornell has made an assignment in bankruptcy. I have written to Mr. Muirhead, as per copy of letter enclosed and suggest that you confer with Mr. Muirhead and Mr. Cowling as soon as possible. It is of the utmost importance that we get all the taxes we can out of the estate.

Respectfully yours, CONANT & ANNIS, per,

I am obliged to you for your letter of the 10th instant and to note particularly that you are making a real effort to get the taxes, I pretty well explained myself in my letter to Mr, Huirhead yesterday, copy of which I sent to you* By all means get the Township to pat in their claim for the taxes which is a preferred claim. Let me know how you are making out with this item of taxes*

We appear to be getting along fairly well, all the papers having been signed, although I now discover that the seal used on the deed is not the correct seal of the Company, However, I think Mr. Muirhead and I can patch this up and we would rather patch it up than throw the whole thing in discard now. Evidently they have an old seal of a previous company which they used on our present deed as the new Company never got a new seal. It is a rather nasty point but I do not think it will ever cause any trouble especially if Mr. Muirhead assists me in patching it up as I have outlined to him in a letter to-day.

I understand from Mr. Muirhead that he has sent you one copy of the agreement with Mr. Cornell. You will see that Cornell is to pay 60,00 on or before the last day of this month, August, I hope you will try and collect it from him and in any event keep me advised. If and when he goes pay you anything, you will have to open an account in the bank at St, George, In doing this, you can let the Bank Manager see the trust agreement, copy of which you have, and particularly paragraph 5 thereof. The Bank Manager will want specimen signatures and you can send the card to me and I will sign it.

Your letter of the 27th and enclosures duly Mr, Bowling came over to the office this morning and he and the writer signed them all and the deeds.

I am expecting to start to-morrow coming for a little trip for a couple of weeks, and as I have several things to finish up to-day I em putting all the papers together in the envelope in which they arrived here, and have written to Mr. Griffith that he need not hurry to come into town until my return to affix his signature, also telling him t&at all the other signing has been done* I have also written to Mr. Cornell telling him that I expect to be away for two weeks and will give him his copy of the Agreement on my return. I also contratulated him on the friendly attitude your Mr. Gonant adopted last Wednesday, and saying that I feel quite sure he will have no difficulty in getting along in a friendly way with the three trustees.

Yours truly, BREWSTER AND HMD.

Following our conf arena a at the residence of M, Cyrus Griffith (St. George) yesterday, I have revised and reingrossed the trust agreement in accordanoe with our understanding and enolose the herewith. (4 copies). This has 'been signed by myself and it remains yet to be signed by Mr. Griffith, Mr. Bowling and 3. Bell & Son Company t Limited. I trust you will use your best endeavours to have this completed without delay and when it is so completed, let me have back two of the duplicate originals. I suggest that Mr. Dowling

should hold one and Mr. Griffith the other.

You took with you yesterday the completed agreement between B. Bell & Son Company , Limited, and Orra 3. Cornell for the purchase of the property at 3700.00 with interest at S&S. This agreement was revised and set up in Mr. Cornell's presence and to hie satisfaction and signed by Mr. Cornell. It remains to be signed by B. Bell A Son Company, limited, and, of course, the corporate seal affixed then this has been done, I would thank you to let me hare a duplicate original of the agreement. One duplicate original of the agreement should also be forwarded to Mr. Cornell and I think that Mr. Griffith should hold the third duplicate original since he has to do the collecting.

Limited, and the corporate seal affixed. When this has been done. I would thank you to register the.deed and sand me the duplicate original.

How that we have finally arrived at something definite, I would urge you to carry on with the completion of these documents without delay. I am writing to Mr. Griffith to-day and he will probably get in touch with you and I do not think you will any difficulty getting him to sign. She signatures by Mr. Bowling and B. Bell & Son Company, Limited are within your control.

We are enclosing copy of letter which we have written to Mr. Conant, and we will be glad if you will notify Mr. Cornell in good time so that he will attend at Mr. Bowling1 s Office in the expectation of making some fresh arrangements regarding the St. George property. 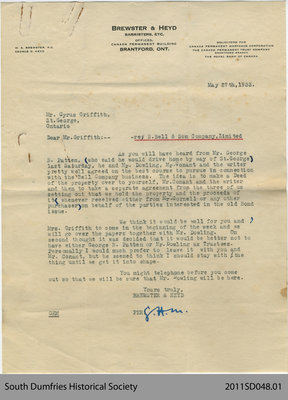