Media Type
Text
Item Type
Documents
Description
This is a set of documents related to the settlement of the Bell & Son Estate.

MEMO RE DISTRIBUTION ON SALE TO JOHN TAYLOR

the above balance of $1171.78 will be distributed as follows:

the above allowance to trustees, 1100, will be distributed as follows:

While in Victoria, Jim strongly urged me, as being in a sense neutral, by not being very much interested in Mother’s will, to take the initiative and urge along the settlement of the estate. Charlie added his appeal to this when I saw him in Toronto on my return, and when I got home Frank also thought it advisable. Consequently I got in touch with Stanley Boughner and after n long discussion I learned where matters stood and what seemed necessary to be done.

Mr. Boughner now has the money in, which totals $5,200. He has also entered for probate (why, I do not know) though stating them to be of no present value, certain bonds of the B. Bell & Son Co., which are somewhat vaguely mentioned in the will, although he has nothing to show that they ever belonged to the estate. He is now particularly concerned in getting Ms bands on them, as a copy of the probate having been sent to the charitable institutions, the official government referee is not inclined to take his word that they are of no present value.

You may have heard that Frank, Charlie, Mary and I had a meeting last Fall with Mr. Boughner and his lawyer, Mr. Innes, at which things were discussed, and after Mr. Boughner and Mr. Innes left, we four formulated a sort of gentleman’s agreement which was to be submitted to the rest of the heirs for their approval or otherwise. Later that agreement seemed unsatisfactory to some, and we now know that it was no good as it was based on a wrong interpretation of the will.

If you will refer to the paragraph in the will which tells what roust be done in regard to carrying out the terms of father’s will you will see that that must be settled before any other of Mother's bequests can be gone on with. Thus is the interpretation of Mr. Innes, and is what Lawyer Sweet here advised Mary some time ago.

Now that paragraph refers to you two, Frank and myself, only, so the first step rests with us. There are two alter natives for us to proceed upon — first, to agree mutually on the justice of our individual claims under Father’s will, second, to have the courts decide whether all or any of us have any claim or not and how much. This latter way of course would mean the opening up of a very large question including a complete review of the handling of Father's estate from the time of his death all down through the many years until it ceased to exist, and the levying of Executor’s fee for Frank, etc. Further, if this were done it would probably also mean that the courts would also handle the rest of Mother’s will, with the likely result that by the time it was all settled the costs would have exhausted the estate with nothing left for any children, or charitable institutions, to say nothing of the publicity.

If you agree, then, with Frank and me, that it is highly advisable to keep the whole thing out of the courts, though we might gain thereby, particularly Frank, and according to Allies conversation with me before she left for the West, 1 think you will, I wish you would intimate what you think should be done as a just settlement of this particular part of the will. It may help you to come to a conclusion to know exactly bow things stand with us four. Frank had his money under Father’s bequest, and it was put back into the business. Louie had hers, and part of it was put back into the business. I had most of mine for my education, but I hold a note for $500, which 1 put back into business after I started practice. Allie never had hers because Grandfather Bell refused to advance it. Speaking for myself I honestly do not know whether I have any claim or not, so will be guided by whether Louie and frank make a claim. Allie seams to be a little differently situated. Frank now refuses to declare himself, and I agree with him in his stand, as to his rights, unless the rest of the heirs, Including the official representative of the charitable institutions, agree with us four as to a just settlement of the paragraph in question, and also to his contention that the Bonds referred to shall not be made a part of the estate or probate. His reason for this is that they shall not be put on the market for sale where they might be bought up by some one to cause trouble. He says Mother expressly warned him about this and hence never wanted then in her possession. Just why she referred to then at all in her will I do not know On the other hand he is perfect¬ly willing that an amount of the bonds, at par value, equal to the sum he owed Mother at time of her death shall be held in trust, say by a Trust Company and to be disposed of when due or at a time and at a value agreed upon by all those parties interested, when the proceeds shall be divided equally among all the heirs, the charitable institutions receiving one eighth, the same as each of the children.

It might seem that the rest of the heirs, other than we four should have some say as to what we four decide upon in regard to father’s will but In reality they have not, and must abide by our decision it is to be settled by mutual consent.

I believe, however, that any decision we arrive at will be so satisfactory that the others will find it to their interests to agree.

I shall be glad to have your views; and remain,

I have your letter of the 16th enclosing the one you have written for Louie and Allie; ana I have hn.d six copies of same typewritten, all of which I enclose herewith to you.

I have taken the liberty to amplify your phraseology in one or two places, but which I think you will readily agree to.

My suggestion is that you sign all them, send trie original to Louie and Allie, and the rest "copy", keep one for yourself, and with an explanatory note, send a copy to Mary, Jira, Charlie aj»d Stanley Boughner, so that they will all know where the thing stands, ana just what you have clone, 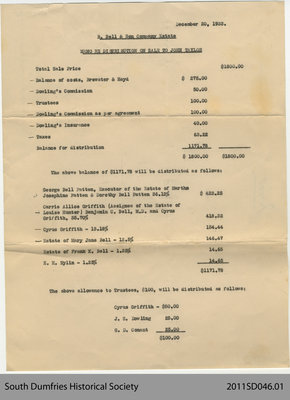