In 1857, John Shupe invited Benjamin Bell, a builder from St. George, to be his partner. The company became known as Shupe & Bell. It produced reaping machines and ploughs, as well as a cannon for the village of St. George. The Works was successful enough that in 1857 it one of their mowing machines won first prize--five pound sterling--at the Provincial Exhibition.

On August 6, 1857, Shupe & Bell dissolved their partnership when John Shupe decided to move with his family to Michigan. Despite this setback, Benjamin Bell decided to carry on the Agricultural Works by himself. In the summer of 1858, he arranged a new partnership with P.O. Lawrason, and the company became Bell & Lawrason. At the Annual Agricultural Exhibition of Brant County of 1858, Bell & Lawrason won first prize for a reaping machine and mowing machine. The company was experimenting throughout 1858 with a combination of the reaper and mower. As a result of these experiments, they developed a combined reaper and mower. The company won the first prize for this development at the Agricultural Exhibition of 1859.

In order to compete with local manufacturers, Benjamin Bell tackled the task of diversification in 1865. He added jointer ploughs, wooden ploughs, and a two-horse cultivator to his line of implements. By 1868, the Works was producing not only the staple supply of reapers and mowers, ploughs and cultivators, but also straw and root cutters and sawing machines. Twenty-five hands turned out one hundred and fifty-six reapers and mowers that year. 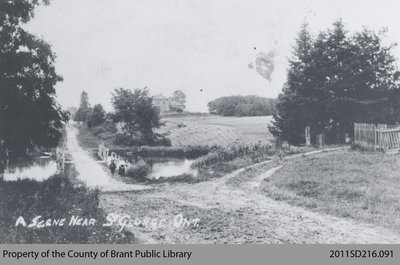