Media Type
Text
Item Type
Documents
Description
This is an Announcement of the Board of Education addressed to the parents and teachers of the Town of Paris and the County of Brant.
Notes
Property of the Paris Museum and Historical Society.
Inventory No. 2010.0187.01

SCHOOL OPENS—Sept. 1st, 1902. All pupils should be present on opening day. This facilitates organization and promotions.

We strongly deprecate the view held by some that the High School exists to train pupils for the professions. OUR AIM is, by awakening their intelligence, by training their powers of observation and by strengthening their morals, to help boys and girls to their highest usefulness, whatever vocation they may afterwards chcose.

The largely increased attendance of the past two years, especially from trie County shows that the school is gaining in public confidence and in usefulness.

This Announcement is respectfully addressed to the parents and teachers of the Town of Paris and the County of Brant. The Board feel that there is no need of pupils going to other counties to obtain an education ; and that they can, with perfect confidence, invite and urge parents to send pup.Is to Paris, where they will receive a'^e.ition, assistance and encouragement in the prosecution of their studies and in the development of character. Any further information desired can be obtained by applying in person or by letter to the Principal.

The School is under a thoroughly competent and experienced staff of teachers.

The Individual Needs of pupils are kept in view as much as possible in the class instruction.

The Equipment of the scientific laboratory is complete, ample provision being made for experiments by the pupils.

Bi-Monthly Reports of progress are sent to parents or guardians,

The Principal desires perfect freedom of intercourse between parents and teachers, and particularly so where the progress of a pupil does not seem satisfactory.

No Tuition Fee is required of pupils whose parents or guardians are residents or qualified ratepayers of the town. Pupils from the County of Brant and other counties pay a fee of one dollar per month.

The Library of the school is well equip-ed with the best books of reference. Besides through the liberality of Mr. John Penman the pupils have the use of a carefully selected list of books in the Paris Public Library, free of cost.

Parents who are obliged to send their sons and daughters from home to receive an education will find Paris High School very desirable from an economical point of view. Every necessary accommodation may be obtained in private houses at firorn $2.25 to $3.00 per week. When parents or guardians wish it, the Principal will exercise a kindly surveillance over students and will assist them in selecting suitable boarding houses.

Dr, Kelly, Public School Inspector for the County of Brant, offers annually a gold medal, to be awarded to the pupil who stands first at the Paris Entrance Examination.

Mr. John Penman has offered the following Scholarships to candidates at the Entrance Examination at the Paris High School. The conditions attached are below:

The first of $12 in cash, to be awarded to the pupil from a rural school who makes the highest total of marks.

The second of $8 in cash, to be awarded to the pupil from any school who makes the second highest total of marks'.

The third of $6 in cash, to be awarded to the pupil from any school who makes the third highest total of marks;

1st—The winner of the Inspector's medal shall not be eligible for any of these scholarships.

2nd—Half of the value of the scholarships shall be payable on October 1st, and the other half on Feb. 1st, on the certificate of the Principal that the winner has become a bona fide pupil of the Paris High School.

In this age of advancement a broader education than can be gained in the Public School is a necessity for boys and girls who are to be USEFUL in the highest sense.

In Agriculture the competition between the newer Provinces and Ontario has become so keen that mere industry no longer ensures success. The Ontario farmer never needed trained intelligence so much as he does to-day. The young man who looks forward to this noble and ennobling vocation should know something of Literature, of Chemistry, of Botany, of 'Physics, and of Mathematics After a High School course in such subjects he will no longer regard farming as an oecupation only, but as a science which calls for his highest efforts. If he desires more special preparation he should take a year or two in the Agricultural College, wh^re he will find that his High School work will exempt him from many classes lie would otherwise require to take, and will enable him to devote more time to special agricultural subjects.

The Mechanic too often exercises no more intelligence than the machine he uses. The way to become an intelligent mechanic is to train the intelligence scientifically. This is the aim of High School education, an aim which cannot be attained in the Public School course, because the pupil is usually too young to fully realize his intelligence.

In Business Life and the Professions the need of High School training is so well recognized as not to require enforcement. No business college course can make a man the best kind of merchant or business manager, because most of the time of such courses is taken up with the tools of office routine, such as, for example, typewriting. What is needed for success is INSIGHT, for which one has to go to History, Literature and Science.

A candidate who has already passed Part . I of Form IT, under the regulations of 1899, will not he required to take the papers in Arithmetic, English Grammar, and the obligatory Physics.

The subjects for pass Junior Matriculation shall be taken at one examination and shall be as follows : English Composition, English Literature, English Grammar, Algebra, Euclid, Arithmetic, History (British, Canadian and Ancient), Latin ' and any two of Greek, French, German, Experimental Science, (Physics and Chemistry.)

COMPOSITION : An essay, to which special importance Avill be attached, oil one of several themes set by the examiners. In order to pass in this subject, legible writing j correct spelling and punctuation, and proper construction of sentences are indispensable. The candidate should also give attention to the structure of the whole essay, the effective ordering of the thought, and the accurate employment of a good English vocabulary. About two pages of foolscap is suggested as the proper length for the essay ; but quality, not quantity, will be mainly regarded. One examination paper.

There are four forms or classes in the school. Beginning in Form I a pupil advances as rapidly as he is able to the higher forms in order.

FORM I— English Literature, Grammar and Composition ; British and Canadian History; Geography, Physical and Commercial ; Arithmetic and Algebra. Botany, Book-keeping and Drawing. Reading Latin is an optional subject. Pupils who can ttike a three or four years' course, especially those who look forward to teaching or other profession, are advised to take Latin.

Junior Leaving Standing is obtained by passing parts I and II of the junior Leaving Examination. The parts may be taken separately in different years or together.

Pupils of Forms I or 11 may take this examination.

LITERATURE : Such questions only shall be set as may serve to test the candidate's familiarity with, and intelligent and appreciative comprehension of, the prescribed texts. The candidate will be expected to have memorized some of the finest passages. In addition to the questions on the prescribed selections, others shall beset on a "sight passage" to test the candidate's ability to interpret literature for himself.

One examination paper. The authors prescribed are :

Form IV — Work from Form III and Shakespeare, As You Like It.

Riverside Literature Series — Goldsmith, The Deserted Village etc. (No. 68), and Longfellow, Evangeime (No. 1).

For Part ll — Any edition of the prescribed texts in English and Foreign languages. 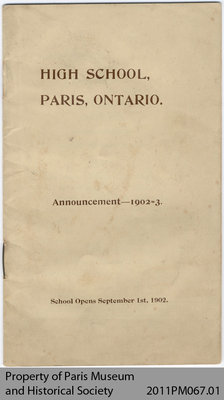