Media Type
Text
Item Type
Documents
Description
This is a list of examination questions for High School Entrance approved by the Education Department of Ontario.

NOTE. — Only six questions are to be attempted. A maximum of 5 marks may be allowed for neatness.

1. Account for the formation of rivers, rain, clouds and glaciers.

2. What separates Ontario from Quebec?

3. Name the manufactures and exports of Ontario and tell where they are produced.

4. Give the boundaries of British Columbia ; describe its physical features; name and give the location of its capital.

How is it caused?

What benefit results from it?

6. Draw a map showing the relative position of Mexico, Central America, Cuba, Hayti, and the Gulf of Mexico and Caribbean Sea with the coast lines that form their northern and southern boundaries.

7. Select any two of the following rivers and tell where each rises, the mountains that determine its course, the directions in which it flows, the countries through which it passes, the cities on or near it, and where it empties:— Amazon, Mississippi, Nile, Danube.

8. Through what waters would you pass in sailing along the coast line of Asia from the Gulf of Aden to the Gulf of Tonquin?

9. Name the largest city in each of the following countries, tell what it is noted for and describe its situation : Canada, United States, Scotland, Egypt, Italy, British India.

NOTE.—Only four of the questions in English History are to be attempted; and only two of those in Canadian History. A maximum of 5 marks may be allowed for neatness.

1. Give an account of the reign of Victoria under the following heads: (1) The Chartists; (2) The Bepeal of the Corn Laws; (3) The Disestablishment of the Irish Church; and (4) The Character of the Period.

2. Name two of the great political leaders of the reigns of George II. and George III., and state, as fully as you can, what each of them did to advance the interests of the English people.

3. What were the chief characteristics of " The New Monarchy"? State the events that led to its establishment, and shew wherein it differed from the Monarchy which preceded it and that which succeeded it.

4. State the chief events of the reign of Elizabeth, shewing why each of them is important.

5. Give an account of the effects produced upon the people of England by the Norman Conquest.

6. Write explanatory notes on the following: Epoch of Eeform; The Eevolution Settlement; Growth of the Democracy.

7. Give as full an account as you can of the life and chief works of any two of the following:—

1. Make a summary of the services rendered to Canada by each of the following: Champlain, Frontenac, and De Vaudreuil.

2. State what you know of the period of Military Eule in Canada. What circumstances led to the passing of the Quebec Act and the Constitutional Act, and what were the provisions of each of these Acts ?

3. Shew, as fully as you can, why Lord Durham and Mr. Poulett Thompson are important in the history of Canada.

4. Shew, as fully as you can, that in both parliamentary and municipal matters Canada is governed by the people.

7 questions are to be attempted. A maximum of 5 marks may be allowed for neatness.

4. A person borrows money for 6 years at 3 per cent, and repays at the end of the time, as principal and interest, $847; how much did he borrow?

5. A map is drawn to a scale of half an inch to a mile, how many acres are represented by a square inch on the

NOTE — Only four of the first seven questions are to be attempted: all candidates will take questions 8 and 9. A maximum of 5 marks may be allowed for neatness.

Oh! how my father longed tojunish for deceiving him the dissatisfied man and woman whom he had so often befriended!

2. Form sentences to shew that each of the following words and phrases may be used with the value of different parts of speech, and name in each case the part of speech:

brave, what, by his side, seeing him.

3. Give all the inflected forms of each of the following words, and explain the grammatical value of each inflection :

4. Name the different classes of pronouns, and classify the pronouns in the following list:

(1) adjectives from the following nouns :

(2) nouns from the following adjectives:

6. Distinguish the meanings of the sentences in each of the following sets:

7. Explain, in your own words, the meanings of Case, Mood, Participle, Tense, and Gender; giving as many examples of each as possible from the following sentence :

The dew was falling fast; the stars began to blink;

I heard a voice; it said, "Drink, pretty creature, drink."

8. Correct the errors in any four, and not more than four, of the following sentences, giving in each case the reasons for your corrections:

(2) His sisters-in-law left for the fair grounds, but

Aggie and her ma staid home. (8) Whom do you think has burst the door in this

morning? s (4) He was real glad when he seen us lay down,

although we had lain down some already, x (5) When a man talks like that, they aren't fit to teach school.

(6) The effort was one of the most determined that

has ever been made.

But to me she was wholly fair9 And the light of the heaven she came from Still lingered and gleamed in her hair.

(1) Classify and give the relation of the subordinate clauses in the foregoing stanza.

(4) Shew, by means of examples taken^from the foregoing stanza, the chief difference between verbs of the [Old and the New (or the Strong and the Weak) Conjugation,

NOTE.—Only two questions are to be attempted. Values

1. Draw a side view (no perspective required) of a penknife with the handle vertical, lower blade wide open, and the large blade open at right angles to the handle.

2. Give a perspective drawing of a book, 4 inches long, 1 inch thick, and 2 inches wide. Be particular about dimensions.

3. Draw a circle 2 inches in diameter, divide its circumference into five equal parts; connect these points by straight lines. "What is the name of the figure thus made?

4. Give a drawing of the section of a common drawer.

1. Write the following line four times:— A thing of beauty is a joy forever,

NOTE.—Candidates will take I., and either II. or III. A maximum of 5 marks may be added for neatness.

She had never murmured or complained; but, with a quiet mind, and manner quite unaltered—save that she every day became more earnest and more grateful to them—faded like the light upon a summer's evening. The child who had been her little friend came there, almost as soon as it was day, with an offering of dried flowers which he asked them to lay upon her breast. He begged hard to see her, saying that he would be very quiet, and that they need not fear his being alarmed, for he had sat alone by his young brother all day long when he was dead, and had felt glad to be so near him. They let him have his wish ; and indeed he kept his word, and was, in his childish way, a lesson to them all.

Up to that time, the old man had not spoken once— except to her—or stirred from the bedside. But when he saw her little favorite, he was moved as they had not seen him yet, and made as though he would have him come nearer. Then, pointing to the bed, he burst into tears for the first time, and they who stood by, knowing that the sight of this child had done him good, left them alone together.

1. Explain the meaning of the italicized portions.

2. What is the title of the lesson from which this passage is taken? Tell something about each of the principal persons mentioned in the lesson.

3. " faded like the light upon a summer's evening." Explain the likeness.

4. What is the subject of the second paragraph ?

5. Quote the poem entitled « Oft in the Stilly Night."

Then there came a day

When Allan called his son, and said: " My son, I married late, but I would wish to see My grandchild on my knees before I die; And I have set my heart upon a match. Now therefore look to Dora; she is well To look to; thrifty, too, beyond her age. She is my brother's daughter: he and I Had once hard words, and parted, and he died In foreign lands; but for his sake I bred His daughter Dora: take her for your wife; For / have wished this marriage, night and day, For many years." But William answered short: " I cannot marry Dora; by my life, I will not marry Dora." .Then the old man Was wroth, and doubled up his hands, and said: " You will not, boy ! you dare to answer thus! But in my time a father's word was law. And so it shall be now for me. Look to it; Consider, William: take a month to think, And let me have an answer to my wish; Or, by the Lord that made me, you shall pack, And never more darken my doors again."

1. Explain as clearly as you can the meaning of the italicized portions.

2. What is the name of the author of the poem ? Why is he called the Poet Laureate ?

3. Give the substance of the lines that precede the above passage. In what relation do they stand to the rest of the poem ?

5. "and doubled up his hands." What does this action on the part of Allan indicate?

7. Which of the two women, Mary and Dora, do you think worthy of the greater admiration ? Give reasons.

Ethereal minstrel! pilgrim of the sky!

Dost thou despise the earth where cares abound ? Or, -while the wings aspire, are heart and eye

Both with thy nest upon the dewy ground ? Thy nest, which thou canst drop into at will, Those quivering wings composed, that music still.

To the last point of vision, and beyond,

I'Twixt thee and thine a never-failing bond) Thrills not the less the bosom of the plain:

Yet might'st thou seem, proud privilege! to sing

All independent of the leafy spring.

Leave to the nightingale her shady wood:

A privacy of glorious light is thine ; Whence thou dost pour upon the world a flood

Of harmony, with instinct more divine : Type of the wise who soar, but never roam; True to the kindred points of Heaven and Home.

1. Explain as clearly as you can the italicized portions.

3. Thy nest. What is gained by the repetition of the word nest ? Why does the poet write thy rather than your ?

4. What is the name of the author of this poem ? In what part of England and at what time did he live ? 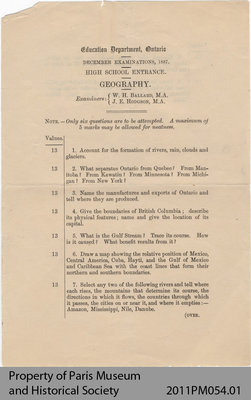