The earlier settlements in this Township were made in and around the village of St. George. The land of the entire township was for a long time claimed by a McPenfield whose right to the possession was disputed by the late Hon. William Dickson. Owing to this unsettled state of affairs, the settlement of the Township, one of the finest and most fertile in Canada, was considerably retarded. In 1817 the actual settlers numbered but 38, who together with their families made a population of but 163 of all ages. Peter Bouslaugh was among the earliest settlers, and to him the credit is given of having founded the village of St. George. One McPhillips, who was also an early pioneer, built the first mill that was erected in the township. This mill was situated on lot No. 4, in the third concession. The Mumas; the Vaneverys; the Pettits; the Copes; the Norths; the Mainwarings; the Stinsons and many others whose names we have not room to enumerate, deserve to be mentioned among those who took up their residence at an early day in this section of the county. N. E. Mainwaring owing to some unpleasantness with the young Republican government left a comparatively luxurious home on the banks of the Connecticut River, to make for himself a home in the land where the old Union Jack was still honored, and where British sway had never been objected to. In 1827 a mill was built by Henry Moe, on mill creek immediately south of St. George. This mill afterwards became the property of John Bouslaugh. It may be worthy of mention the Henry Moe built the first frame barn erected in South Dumfries, which stood for many years a monument of his industry, and formed a subject of marvel for the inhabitants, on lot No. 9 of the third concession, now owned by Dr. Mainwaring. It may also be mentioned in this connection that Mr. Mainwaring, father of the Doctor, brought the first flock of sheep that ever gamboled on the grassy slopes of the township. In 1818 Enos Doan and Isaac and Eleayer Griffith arrived in the settlement. Enos was a man of great muscular strength, and a story is told of his having caught and held an unusually large wolf until the arrival of one of the Griffiths, who dispatched the animal…

William Rosebrugh was also an early settler in the township. He too is said to have been a fearless and courageous man. Of him the oldest inhabitant tells that seeing a large black bear quietly sauntering among some fallen trees, he hastily grasped a convenient tree limb and gave chase to bruin, coming up to his bearship, as he stood between two trees lying parallel and so close together that the animal had no room to turn around and face his foe. The fearless woodman clutched the bear by his shaggy main with one hand and with the other he dealt him a blow which rendered him good only for the purposes of stake and hair oil. Indeed if we were to relate all the stories that are told illustrative of the daring and courage of those early inhabitants of South Dumfries they would swell our history beyond its proper limits. … 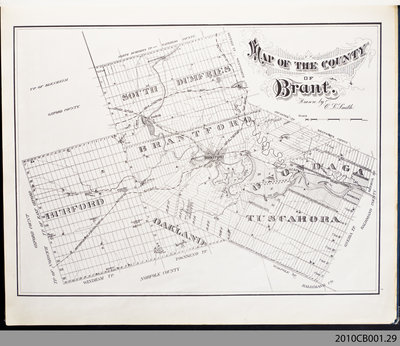 Early map of the County of Brant Details 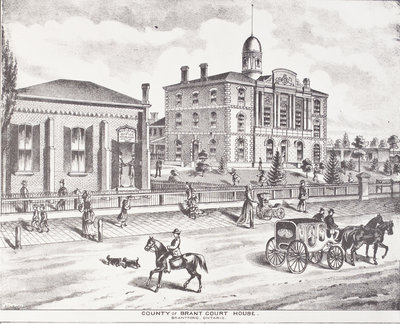 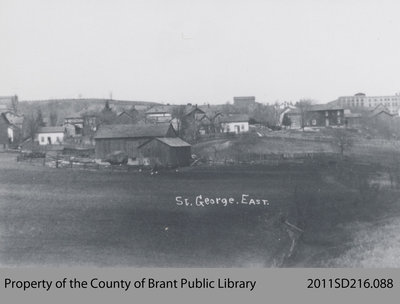 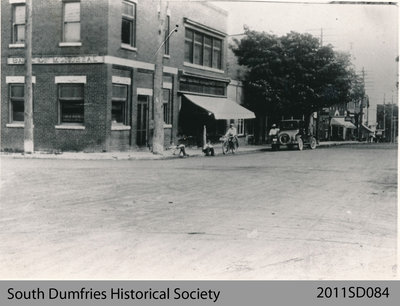