A Burford Christmas
Main Menu → Next Page
Introduction
Pages
IntroductionThe Loneliest Christmas TreeSongs Among the Christmas TreesSanta Claus NightRecollections of New Year's Eve
For decades, Mel Robertson wrote articles about Burford's history in the Burford Advance and the Burford Times. These classic articles from the 1970s give an impression of how the holidays were celebrated in Burford in years gone by.

The Loneliest Christmas Tree is a short story about a Christmas tree's dream of sharing the holidays, which was originally published on December 19, 1979.

Songs Among the Christmas Trees and Santa Claus Night were originally published on December 15 and 22, 1976. They describe the Christmas experience when Robertson was a child in the 1920s, recounting the small-town Christmas concert, Christmas decorations, listening to Arthur Pryor on the phonograph, and more.

Recollections of New Year's Eve was originally published on December 29, 1976. It describes the adventures of a small-town New Year's Eve for a small child in the 1920s.

These articles are reproduced thanks to the generous donation of the Burford Times. 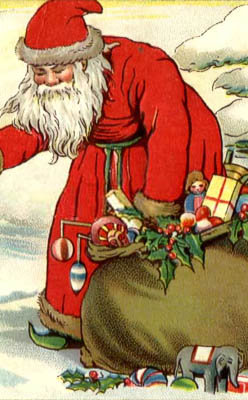