Sociability of another type was to be found in the many fraternal associations in the Township. The first of these was Masonic Lodge No. II which Chief Joseph Brant had founded in 1798 at the Mohawk village east of Brantford. This lodge was moved to Burford in 1801. Detailed information is not available and although John Ross Robertson lists it in his "History of Free Masonry" of 1900, discussions with a prominent Masonic historian at the University of Western Ontario in 1967, revealed doubts that it was a legal lodge. Nonetheless, it did exist as a source of encouragement to many settlers.

On November 5th., 1879, Orange Lodge No. 362 opened its quarters on the site now occupied by H & M Rustproofing, King Street, E., Burford. This lodge was very active and the Burford "Times" of 1886 described its rooms as "cozy" and equipped with an organ and other facilities. In due course, Foresters Lodge No. 132 and the Orange "Young Britons" adopted the building as their meeting place. Eventually, all three fraternities became inactive and in 1947 the long-vacant building was sold to the Rebekahs and moved to the corner of Maple and Dufferin, where, after a number of years as a lodge, was converted to a dwelling.

During the mid-1800's the Sons of Temperance had the strongest group of lodges in the Township; consisting of branches at Burford Bishopsgate, Harley, Fairfield and New Durham. They were noted for their free garden parties in the summer and rallies in the winter. In the late 1800's the Burford lodge met in Wooden's hall at the corner of King and William streets. There on November 11th., 1870, a grand district conference was held which the Brantford "Expositor" described as "Too much talk and too many technicalities to be interesting". It cannot be determined how long the Temperance lodges lasted in the Township but in 1911 the "Advance" was advertising meetings for the "Royal Templars of Temperance".

At about the same time as the Temperance lodges were flourishing, the Literary Society movement was active in the Township with strong groups at Northfield, Salem-Pres., Wm. Harley, New Durham-Pres., Dr. Clendennen, Cathcart, Burford and Harley. Literary Societies were noted for their "Penny Readings" where for a penny you could enjoy an evening of prose and poetry. They also sponsored debates and early issues of the Burford "Times" are full of debates on subjects such as "Resolved that Intemperance has Caused More Misery than War", "Resolved that School Books Should be Provided Free", etc.

In 1901 one of the first branches of the Women's Institute was founded at Mrs. Brethour's and held its first meeting, shortly after, in the hall above Kuehl's Hardware store. Also among firsts was Burford's Boy Scout Troop which was established on September 9th., 1910 under the sponsorship of the Congregational and Anglican churches with the active support of the 10th. Brant Dragoons. Weekly orders were issued by the Adjutant and the time devoted to marching, stave practice and even sword drill, brought irate letters to the "Advance" from more peaceful citizens.

One organization which created a great deal of sociability without being a lodge or fraternity, was the Burford Board of Trade. The Board was founded on December 17th., 1903 at a meeting in the Orange Hall. Forty-three men attended this meeting and elected A. G. Ludlow as President, A. D. Muir Vice-President and C. F. Saunders, Secretary. The group flourished until 1906 when A. G. Ludlow, the chief promoter retired. Then things fell apart for a few years until October 24th., 1913 when "A Grand Smoking Concert" was held in the Barnea Hall to reorganize the Board. Over 100 business men attended and elected Alan Kneale as President and C. F. Saunders as Honorary President. This assembly certainly merited the name "grand" as it was addressed by many prominent politicians and businessmen and entertained by a number of eminent musicians. Projects for which the old Board took credit were announced to have been - a Chartered bank, a steam laundry, a resident dentist, drilling for gas, fire protection, a site for a new Armoury, a candy factory, new streets, painting of hydro and telephone poles and a private telephone in the local switchboard. Later projects included a trophy for the Lawn Bowling Club and other improvements. A perusal of early membership records show that the Board of Trade was not merely an organization of merchants but embraced doctors, clergymen, farmers and citizens of no apparent trade or profession, who were interested in the community.

Over the years, the Board of Trade has been an ephemeral thing opening and closing like Morning Glories. It has been almost impossible to trace the number of times it has been reorganized, or to list the multitude of officials who have served it. However, generally speaking, the Burford Board of Trade has accomplished many things for the community. 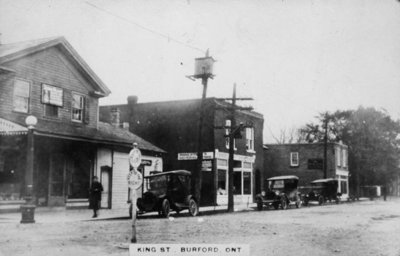 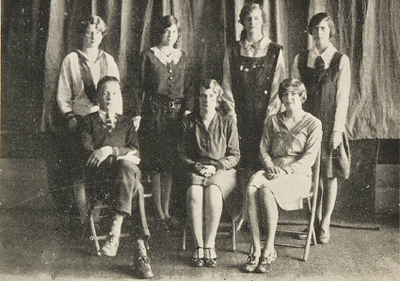 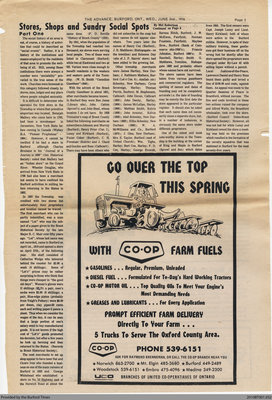