BLIND RIVER — The Northern Ontario Country Music Hall of Fame, which moved to Blind River's Timber Village Museum last year from Sault Ste. Marie, will see the first person from the vicinity of its new home inducted this spring.

The three candidates nominated for the induction are Earl Bell, Lucien Pilon, and Richard Sayers.

All three men are well known in the area because for decades they have been sharing their music-making skills at numerous local venues.

Pilon is not only a player, but is a self-taught violin maker as well.

Sayers, an Iron Bridge resident, is a multi-talented entertainer.

He sings as well as playing guitar and violin.

A decision as to which of the three musicians to honour this year will be made through a vote, which will be held between 10 a.m. and 7 p.m. on May 24 and from 10 a.m. to 5 p.m. on May 25 at Country Style Donuts in Blind River.

Those wishing to cast a ballot will have to pay $2. In return, they will get a ballot, a coupon for coffee and a bumper sticker promoting the hall of fame's new Timber Village location. 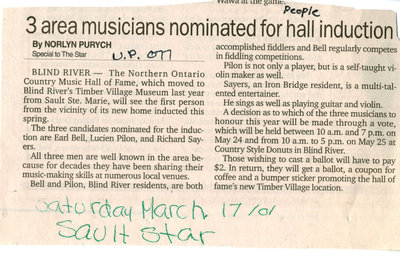