Ronald Anthony Harry Panter was born on November 15, 1919 in Plymouth, England to parents Harry Panter and Edith Middlewick. He joined the Royal Naval College in Dartmouth as a Midshipman at the age of eighteen, only two years before the start of World War Two.

Ronald served various ships during the Second World War including HMS Ajax at the famous Battle of the River Plate. He married Mary Bounty in 1940 and together they had two daughters; Hilary in 1946 and Antonia in 1950.

After the war Ronald had several naval tours where the whole family lived abroad; Malta in 1947 and 1954, New Zealand in 1949, and Ceylon (Sri Lanka) in 1956. He retired from the Royal Navy as a Lieutenant Commander in 1959.

After his lengthy career with the Royal Navy, Ronald began working for the Standard Telephone and Cable Company. He stayed with them until retiring in 1984 when he and Mary then moved to Colyton in Devon. This was always their dream, where they were greatly involved with village life. They were active members of the local Church, Probus, the Women’s Institute, and the Masons. They welcomed five grandchildren; Paul, Richard, Ben, Lucy and Emily.

Ronald and Mary loved following county cricket, walking, socializing and travelling, particularly in France and Scotland. Ronald was a voracious reader and did the crossword every day until he died at the age of ninety-three on June 26, 2012. 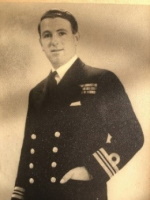