Robert Horace Cecil Ellis was born on April 24, 1922 in Norwich, U.K. to parents Robert Sydney Ellis and Joyce Nunn. At the age of seventeen, Robert took the Civil Service examination for entry in the Royal Navy and obtained a cadetship in the executive branch of the Royal Indian Navy. He left school in July 1939 and received his cadet’s uniform two days before World War Two was declared. By September he was appointed as a Cadet Royal Indian Navy to Britannia Royal Naval College in Dartmouth.

Robert was due to join HMS Norfolk in January 1940 but contracted measles. As a result he joined HMS Ajax just a few weeks before his eighteenth birthday on April 1, 1940. He was given the duty of Forecastle Midshipman and began gunnery and signals courses, semaphore and Morse flashing training at the Chatham Naval Barracks.

Robert furthered his training during active duty by completing Sub Lieutenants’ courses in signals, Anti-submarine courses at Portsdown, attending gunnery school at Whale Island, and torpedo training at Roedean in Brighton. By July 1943, while serving as Lieutenant of HMIS Sutlej, Robert participated in the capture of Sicily. They formed part of the escort of a very large convoy heading for Malta as part of operation Musky. In December of that same year the ship was ordered back to India.

In November 1944 he was appointed to HMIS Bahadur, a boys’ training establishment in Karachi where he was a seamanship training officer. While still a member of the Royal Indian Navy Robert married Madeline Francis Jay in the summer of 1947. During his lengthy career he served several ships; HMS Minerva, HMS Coniston, and HMIS Gambia working up the ranks to eventually become Commanding Officer in 1957.

Robert was Mentioned in Despatches in 1941 and received several complementary references from senior officers during his time with the Royal Indian Navy. Comments from his superiors described him as loyal, conscientious and an excellent warrior. “A keen, hardworking and dependable officer possessing a high sense of duty”.

Robert Horace Cecil Ellis died on May 5, 2014 at the age of 92.
Robert shares the street with A.V. Ellis, River Plate Veteran. 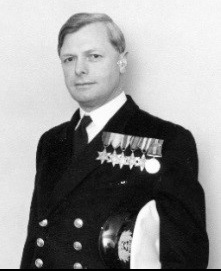