Charles (Peter) Maggs was onboard the Ajax before World War Two. He was a member of the original steaming party which took Ajax from Vickers-Armstrong’s builders’ yard on April 12, 1935 to Portsmouth to be fully commissioned for service. He was also present when the ship was honoured during the final fitting-out period by a visit from The Duke and Duchess of York, later King George VI and the Queen Mother.

Charles Maggs earned his Bachelor of Arts and Bachelor of Education. He spoke French and Spanish and tutored before and after the war. He married Sybil, a fine artist who was in the Women’s Auxiliary Police Force, and they had one son, Nigel.

While onboard HMS Ajax Charles worked in the engine room and ran the evaporators which turned salt water into fresh water.

After leaving the Royal Navy Charles joined the police force in England where he worked for 26 years before retiring in 1968. “I graduated in Science and Math, so I went on to teaching for another 20 years”. In 1984 he tutored Paul and Linda McCartney’s children in the United States while they were making the movie ‘Give My Regards to Broad Street’.

Charles was a founding member of the HMS Ajax and River Plate Veterans Association and acted as its first treasurer. He was decorated for his acts of bravery in saving both human and animal life while in the Royal Navy, Hastings Borough Police and Sussex Constabulary. He held the Polish Medal of Valour and was a member of the Legion of Honour of the Croix de Guerre. 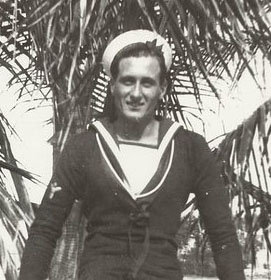