Thomas Graham was born in Kelty Fife, Scotland on April 21, 1919. He was one of eight boys who were raised primarily by a single mother, as his father had died at the age of 48. He left school at the age of fourteen and began working in the Aitken Colliery, a mine which most of his family worked at as well.

Thomas enlisted in the Royal Navy early in 1939. His first posting overseas was as a stoker on HMS Ajax, which was stationed at the time in South America. He and twenty two of his shipmates sailed on RMS Matorao from Southampton to Curacao in the Dutch East Indies where he was to pick-up the Ajax. HMS Ajax was known as the ‘White Lady of the South Seas’ and even in peace times she had a great reputation. He served two years and ten months on board the Ajax during which time he saw action at the Battle of the River Plate.

After an injury and convalescence time in Alexandria, Egypt Thomas was posted as a Prisoner of War Guard on a liner named Rangatikki, which belonged to the New Zealand Shipping Company. It was his duty to ensure that the Geneva Conventions were adhered to. The ultimate destination of those prisoners was Canada.

Prior to leaving the Royal Navy in 1952 he served and saw action on various other ships. In 1955, Thomas and Janette, together with their daughters Annette and Jennifer and Janette’s mother, emigrated to Australia where son Gordon was born.

Thomas passed away on April 12, 2002 in Sunshine, Victoria, Australia. 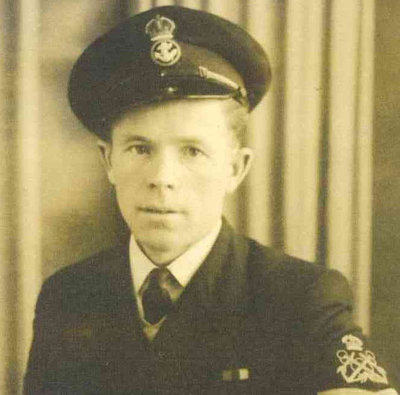