Lieutenant Gamon was the son of Captain Maurice Partridge Gamon and Ethel Elizabeth Gamon of Cossington, Leicestershire. He received his Bachelor of Science (Honours) in London and his Teacher’s Diploma from the Institute of Education. He was a Kitchener Scholar and represented Lancashire in hockey. Maurice died during action east of Malta while on HMS Ajax on October 12, 1940. He was twenty four years old.

HMS Ajax provided cover for Convoy MF4 to Alexandria with Fleet units and deployed with ships of Squadron east of Fleet. It was in close range night action alongside HM Cruisers Orion, Sydney and York screened by HM Destroyers Nubian and Mohawk against an Italian convoy in the Gulf of Otranto. The Destroyers Airone and Ariel were sunk and Destroyer Artigliere was damaged. The Ajax was hit by seven shells resulting in thirty five casualties and thirteen deaths.

A Tree was planted by council in memory of Maurice under the Millennium Tree Planting Project. There is a memorial to Maurice Partridge Gamon at alocal grammar school in Preston, Lancashire where he was a teacher.
Geographic Coverage
Copyright Statement
Copyright status unknown. Responsibility for determining the copyright status and any use rests exclusively with the user.
Location of Original
Original document and image located in the Ajax Archives.
Contact
Ajax Public Library
Email
WWW address
http://www.ajaxlibrary.ca
Agency street/mail address
55 Harwood Avenue S.
Ajax, Ontario
L1S 2H8 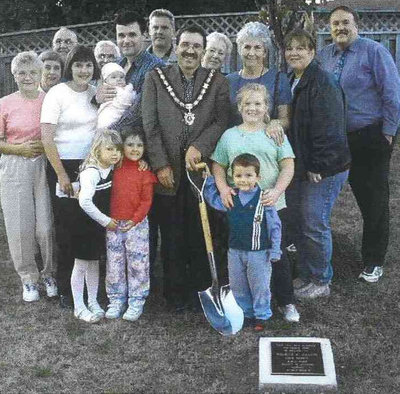