The son of a coal miner, Ken was born in Tingley, near Leeds in 1922. He spent his childhood years there and started work as a grocer’s assistant at the age of 14.

In 1940 Ken volunteered for service in the Royal Navy. By 1942 he was posted to HMS Ajax as the ship’s engineering writer, a job that required him to record the fuel used and engine running details during the ship’s various patrols. He recalls one particular patrol when Ajax was in the Mediterranean heading for Malta and an Italian plane dropped a bomb down one of the ship’s funnels. Four of the ship’s six boilers were damaged by the blast and many of the crew were killed or injured. The ship had to limp slowly to Gibraltar and then across the Atlantic to the Brooklyn shipyards in America before repairs could be made, all the while very vulnerable to attack should the enemy have located it.

After the war Ken returned to work in Leeds in the grocery business and joined a large retail chain called Thrift Stores. It was there that Ken met Pauline in the early 1950s. They were soon married and had two children, Tony and Linda. In 1956 Ken was appointed as manager of the first self-service store (supermarket) in Leeds. He went on to become self-employed by buying his own shop, a greengrocers, in 1961. A series of small business ventures followed until the couple moved to New Zealand in 1975, where they worked for a local town council until returning to England to live on the Yorkshire coast in the early 80s. Ken and Pauline remained happily together for 52 years until Pauline’s death in 2005. Ken died on March 20, 2011, days after his 89th Birthday.
Geographic Coverage
Copyright Statement
Copyright status unknown. Responsibility for determining the copyright status and any use rests exclusively with the user.
Location of Original
Original document and image located in the Ajax Archives.
Contact
Ajax Public Library
Email
WWW address
http://www.ajaxlibrary.ca
Agency street/mail address
55 Harwood Avenue S.
Ajax, Ontario
L1S 2H8 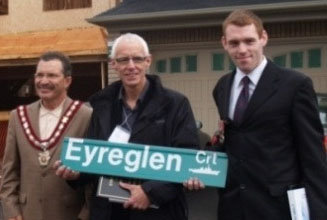