Veteran of the Battle of the River Plate:

William Walter Dyer was born on December 15, 1916 on the Isle of Dogs, which is a district in the east end of London. The Isle of Dogs was predominantly an industrial and docks area. Unless you knew someone already working in the docks you did not have much of a chance of getting a job. As a result, William joined the Royal Navy. He was posted to HMS Pembroke as an assistant cook from September 10, 1935 until September 8, 1936. On September 9, 1936 William was posted to HMS Cairo and served on that ship until August 1937. He then returned to HMS Pembroke until January 1938. On January 11, 1938 William joined the crew of HMS Ajax as a Leading Cook where he spent the remaining years of his active service. He celebrated his 23rd birthday at the Battle of the River Plate. By August 1942 he had attained the rank of Petty Officer. When he left HMS Ajax in March of 1945 he had the distinction of being the longest serving crew member on the ship. Following the war, William was employed by a large firm of timber importers on the Isle of Dogs. He spent the rest of his working life at this company and retired at the age of 68. The Isle of Dogs has long since been transformed into a Commercial and Banking Centre which incorporates the large Canary Wharf Complex. William married Dorothy May Rump on May 16, 1942 and had four sons, Kenneth, Andrew, Bernard and Malcolm. He was never a boastful man, rather he was quietly proud of his achievements. He represented the Royal Navy in boxing and won many cups and medals. At one time he was Middleweight Champion of the Home Fleet. William and Dorothy celebrated their Golden Wedding Anniversary in 1992 and less than a year later, on February 3, 1993, William passed away. 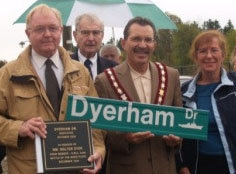