James Frederick Cecil Ducatel was born on January 30, 1913. He joined the Royal Navy on October 20, 1931 at the age of eighteen and served as a Stoker 2nd Class. By October 20, 1932 he was promoted to Stoker 1stClass. He then became the Acting Leading Stoker on August 1, 1937 aboard HMS Ajax. James became Acting Stoker Petty Officer on March 18, 1941 and his advancement in rank was retroactively confirmed when he was back at HMS Pembroke (RN Barracks Chatham) in 1942 from February to August. On November 12, 1944 he was made Chief Petty Officer.

James saw active service throughout World War Two on a total of three ships; HMS Ajax, HMS Ilex, and HMS Farndale. On HMS Ilex from May 5, 1941 to July 5, 1942 he travelled to Norfolk, Virginia for a refit after being dive bombed. On June 20, 1945, while serving on HMS Farndale, James was discharged due to ill health when he was diagnosed with tuberculosis. He was sent home on July 9, 1945.

James was awarded several medals during his service. He received the 1939-45 Star for involvement in World War Two, the Atlantic Star with a France and Germany clasp for his involvement in convoy protection over the Atlantic Ocean, the Africa Star with a 1942 to 1943 clasp awarded for entry into North Africa, the Italy Star, awarded for entry into Italy from June 1943 to May 1945 and the War Medal, awarded for 28 days of service.

After the war James was re-trained in three different professions at Kidbrooke Training Centre. He was trained as a bricklayer, an electrician and a watchmaker. He worked as a watchmaker at a Maidstone Kent Jeweler’s shop until 1951. After that he became a Customs and Excise Officer (a Watcher at Tilbury Docks). In 1961 he joined the Central Electricity Generating Board in Maidstone and then at Northfleet Power stations, where he worked as an Assistant Plant Operator and then Plant Operator until his retirement around 1977. Seven years later, on January 7, 1984 James Ducatel died at the age of seventy one.
Geographic Coverage
Copyright Statement
Copyright status unknown. Responsibility for determining the copyright status and any use rests exclusively with the user.
Location of Original
Original document and image located in the Ajax Archives.
Contact
Ajax Public Library
Email
WWW address
http://www.ajaxlibrary.ca
Agency street/mail address
55 Harwood Avenue S.
Ajax, Ontario
L1S 2H8 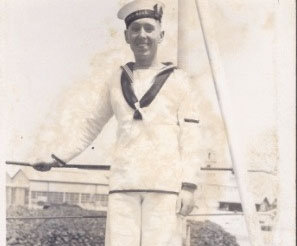