Alfred Joseph Hazelwood Chambers was born on September 2, 1920 in Harwich, Essex. He was the eldest of three sons. All served during World War Two, Alfred in the Royal Navy and brothers Leslie and Gordon in the Merchant Navy.

Alfred joined the Royal Navy on February 15, 1937 as a Boy 2nd Class. It wasn’t until August 1939 that he joined HMS Ajax and was rated as an Able Seaman at the time of the Battle of the River Plate a few months later. Alfred left the Ajax in August 1940 and was discharged from the Royal Navy in 1955 after serving on several ships and at various naval bases.

Family describe Alfred as a very private man who preferred not to talk of his war experiences. His life revolved around his family and his love of nature. His draw to the water transferred into his civilian life through his appointment as a fishing bailiff. He died on May 16, 2001 at the age of 81.
Geographic Coverage
Copyright Statement
Copyright status unknown. Responsibility for determining the copyright status and any use rests exclusively with the user.
Location of Original
Original document and image located in the Ajax Archives.
Contact
Ajax Public Library
Email
WWW address
http://www.ajaxlibrary.ca
Agency street/mail address
55 Harwood Avenue S.
Ajax, Ontario
L1S 2H8 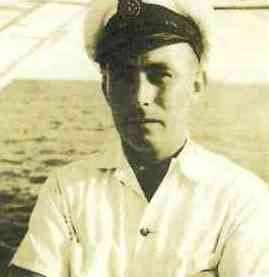