Hubert Roy Blowers was born in Lowestoft, England on July 16, 1925. He joined the Royal Marines on January 21, 1942 at the age of 16 and a half (1 year underage). After training at Chatham he was assigned to his first ship, HMS Ajax. While on the Ajax he traveled to the Mediterranean and the North Atlantic where the ship escorted convoys and guard ships to Mediterranean ports and patrolled for U-boats.

Roy Blowers wrote;
We were put out of action on the 2 January, 1943 by 500lb bomb dropped by a Stuka, dive bomber whilst in harbour in Bone, North Africa. The bomb passed through the deck approximately 10 feet from our gun crew, of which I was one, hitting and killing one of our marines. The bomb went through the deck and exploded in the boiler room blowing a hole in the side of the ship and killing around 18 matelots.

After being towed to Gibraltar, one boiler was repaired and the hole in the side of the ship patched, we sailed to Brooklyn Naval Docks in New York for repairs.

On his return to England Roy volunteered to join the Combined Operation Royal Marines. He then trained for D-Day landings and landed on D-Day, on the first wave on the Normandy beach called Arromanches. He then went through France, Belgium, Holland, crossed the Rhine in Germany and eventually took part in taking over the submarine pens at Wilheimshaven in Germany.

Roy married, had one daughter and finished his working days as an area manager. He died on November 17, 2017 at the age of 92.
Copyright Statement
Copyright status unknown. Responsibility for determining the copyright status and any use rests exclusively with the user.
Location of Original
Original document and image located in the Ajax Archives.
Contact
Ajax Public Library
Email
WWW address
http://www.ajaxlibrary.ca
Agency street/mail address
55 Harwood Avenue S.
Ajax, Ontario
L1S 2H8 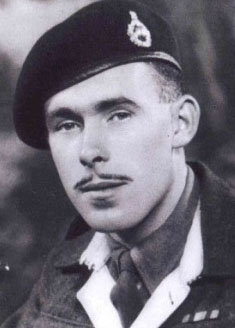