Leonard Robert Dowers (Jim) was born on June 1, 1917 in Deptford, England to parents Leonard James Dowers and mother Sarah Amelia Johnson. He was one of two children, his younger sister Lily Edith being born in 1920. At some time before 1920 the family moved to Ipswich where Jim’s father worked as a foreman in a foundry producing non-ferrous alloys.

Jim joined the Royal Navy in July 1932 at the age of fifteen at Chatham naval base. At the time there were several recruits named ‘Leonard’, so he gained the nickname ‘Jim’ after the advertising character Sunny Jim. At the shore base HMS Ganges in Suffolk he began his initial Royal Navy training as a boy seaman but soon specialized in telegraphy (Morse code). He was a keen sportsman playing Hockey and winning awards for swimming and cricket.

Jim was onboard HMS Ajax when the crew, along with that of the Exeter, assisted with the after effects of an earthquake in Chile in January 1939. For this they were awarded a medal from the Chilean government. At the outbreak of World War Two Jim was still with the Ajax, South Atlantic division and was a Chief Petty Officer during the Battle of the River Plate. Jim served in many areas of conflict during the war including; The Russian convoys, Malta and the fall of Crete. Along with the decorations from the United Kingdom he was awarded medals from Chile, Greece and Russia.

After leaving the Navy Jim worked in The Marine Aircraft Experimental Establishment Research Centre at Orford Island in Suffolk. He then worked for the local electricity company and finally for Fisons, a fertiliser manufacturer. In his later years he enjoyed fishing, gardening, and wine making and was a member of a local Fuchsia enthusiast society. To commemorate the 50th Anniversary of the Battle of the River Plate Jim had a hybridizer create an Ajax, Exeter, Achilles, Graf Spee and Altmark Fuchsia. When Jim’s street was dedicated in 1989 he and his wife Pat visited and Jim presented the Town with the ‘Ajax’ Fuchsia.

Jim passed away peacefully at his home with his Third wife Pat and his son Christopher by his side on June 20, 1995. His ashes were scattered on the river Deben by his sons at his favourite fishing area. He is survived by his sons Christopher and Simon (who followed in their father’s footsteps and went to sea in the Merchant Navy) and his grandchildren; James, Meg, Ben and Sam.
Geographic Coverage
Copyright Statement
Copyright status unknown. Responsibility for determining the copyright status and any use rests exclusively with the user.
Location of Original
Original document and image located in the Ajax Archives.
Contact
Ajax Public Library
Email
WWW address
http://www.ajaxlibrary.ca
Agency street/mail address
55 Harwood Avenue S.
Ajax, Ontario
L1S 2H8 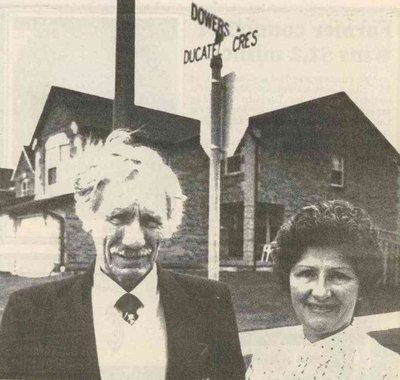