Fred joined the Royal Navy on his sixteenth birthday in 1930 and by 1937 he had joined HMS Ajax. During the Battle of the River Plate the radio mast was destroyed and while still under fire Fred reconnected communications and was awarded the Bronze Oak leaf. King George VI presented the Oak leaf to him and others in January1940.

In late April, 1940 Fred led a team of men to Norway to set up radio stations for communication between theNorwegians and the British. He led a boarding party to take over a French warship, was on an armed merchant ship which sank in 10 minutes after receiving one bomb and spent several months on a Motor Torpedo Boat laying mines in the North Sea.

Fred was awarded the Distinguished Service Order after the war and became a tutor at Sheffield Naval College. His last position in the Navy was as Chief Radio Supervisor at the Admiralty in London. He took early retirement at 59 due to ill health and died two years later of lung cancer.

Fred used to say “The Navy is my life and my religion”. 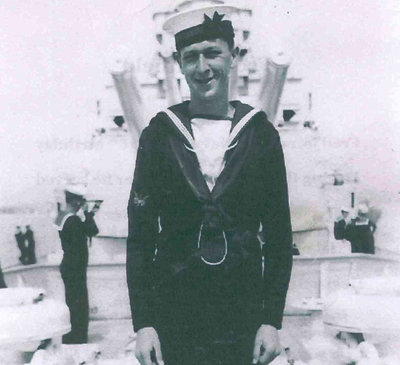