Frank joined the Royal Navy in 1935 for training at HMS Ganges, a ‘stone frigate’. He spent 15 months there before joining HMS Queen Elizabeth, a 15 gun WW1 battleship. As he was promoted he left her and joined HMS Ajax in January 1938. As the ship’s Telegraphist he took the initial call that Britain was now at war with Germany.

After the Battle of the River Plate the ship travelled to the Falkland Islands to open a Wireless Station. The new station needed an operator and a volunteer was requested. It was then that Frank began working in the Falkland Islands as the station’s first Telegraphist along with three civilian operators. Captain Woodhouse later explained in a letter dated February 8, 1940 to Frank’s father that it was due to his superior ability that he received the post and that ‘he is now on the top line for advancement to Leading Telegraphist and should very soon be promoted to that rating.’ Frank was promoted to Petty Officer in 1940 and remained in the Falkland Islands for three years and four months.

On his way home to England, Frank arranged a meeting with a woman by the name of Peggy that lived in Buenos Aries and whom he had met while traveling before the war. They became engaged and she would travel to the UK later in the year. They were married on Trafalgar Day, October 21, 1944.

When back in the UK Frank took charge of the Signal School at Harwich in England, teaching staff for the minesweepers operating off the east coast. He spent some time on destroyers and minesweepers himself until retirement from the Royal Navy in September, 1948.

Frank joined Pye Limited (later Philips) in October 1948 as a development engineer designing, and later manufacturing, television broadcast equipment. The equipment was eventually sold in Canada, and they even had a headquarters in Ajax, Ontario. 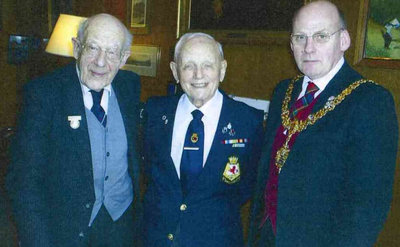