The town of Cache Bay was named Cache from the Indian word Hidden. The rail board was built through Cache Bay in 1883. The first settlers here were in 1884, when the firm of Barnet & Mackie, lumbermen under the mining act, and built a depot for their bush businers and in the summer of 1885 built a house office storehouse, barns and other buildings; also a lumber shanty witch stood where the old planning mill rout stands. The old office is still standing on the hill. The house a short distance east of same. The only way to get in was by railroad or by water. The first family to occupy the depot was the John Jessup family. He was an old employee of the Barnet & Mackie Co. from their depot on the Bonneckere River 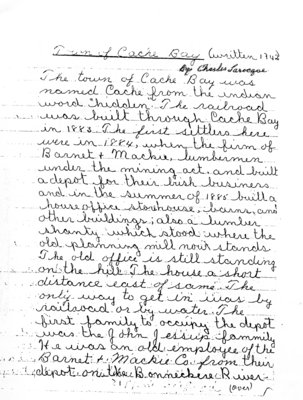