Media Type
Image
Item Type
Photographs
Description
The Merton area (Lots 26-35 2SDS Trafalgar) was settled as early as 1810. The first settlers were David Utter, Joseph Smith, William Bates, Cornelius Tipps and Henry Cale. The community adopted the name "Merton" when the post office opened in 1852. The name was likely chosen to commemorate the battle of Trafalgar and Lord Nelson as other local villages had chosen Bronte and Palermo. The post office remained open until 1917 when it was replaced by rural mail service from Bronte.

Some of the later settlers were John Sheridan, who lived on the west side of 2nd Line in the hollow just below Lower Middle Road. His home housed the post office and his blacksmith shop was adjacent.

The Riggs arrived in 1830 and their land on the northeast corner of Bronte (Station) Road and Lower Middle Road was called "Sunnyvale."

The Speers family owned the land west of West River Street to West Street from Lake Ontario and north of Rebecca Street. They called their farm "Summerlea".

The Breckons arrived in 1830 and farmed west of Twelve Mile Creek (Bronte Creek). Their farm was called "Spruce Lane". 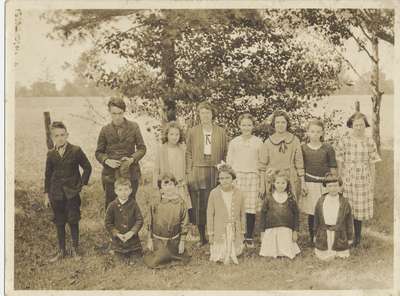