Mystery Question
This photograph and information is courtesy of the Biggar family. Please contact the TTHS if you can tell us more about the other two ladies to add to this record.
[Please answer by clicking on the Comments tab]
Media Type
Image
Text
Item Type
Photographs
Description
Hettie was the church organist at Munn's United Church at the young age of 13! She played the organ at Munn's church until age 98 when she fell down the stairs and broke her hip. She lived to age 103. A photograph of her piano at the house shows that the sound board goes out back from the keyboard which means it was a baby grand type of piano (no photograph of her piano has been uploaded.)

Although the label for this photograph does not clearly say so, it is likely the photogaph celebrates them being life members of the Munn's United Church Women's Auxiliary.

As active church members, farm women and in Hettie's case, wife of an area Reeve, these three women were also active in other area women's associations working to improve community life, the education of local children, and to not only bring opportunities for the continuing education of women but to also enjoy the fellowship of their neighbours.

Hettie was also a life member of the Halton Women's Institute and the Women's Auxiliary and before her retirement was secretary of the latter. On pages 8-9 of the 50th Anniversary booket of the Halton Women's Institute lists "Mrs. A.A. Biggar as Secretary of the Postville (Trafalgar) branch, Mrs. W. T. Brown was President when this branch started in 1905". By 1954, this branch had been disbanded.
Notes
A link to the website of Munn's United Church in this record provides you with a brief history of this congregation and the church buildings. 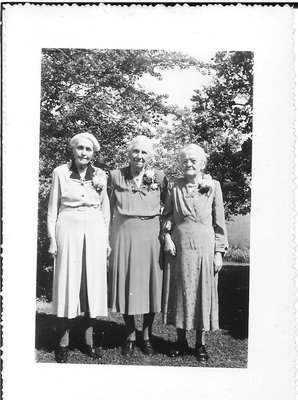