Mystery Question
Can you add any other information about the occasion of this photograph and the regiment?
[Please answer by clicking on the Comments tab]
Creator
A.A. Gray & Co., 561 Queen St., Toronto, Photographer
Media Type
Image
Item Type
Photographs
Description
This undated photograph of the Halton Lorne Rifles is thought by family to have been taken in about 1881.

Captain Joseph Edward Cullingworth joined the regiment in 1866 in response to the Fenian raids. A private at the time, he received the Canada General Service medal (Library and Archives Canada, Medals, Honours and Awards record.) He was identified with the regiment for 20 years, succeeding Major Fox as captain of the Oakville company, and going to the training camp at Niagara each year.

Other veterans of the regiment and of the Fenian Raids were pallbearers at his funeral in 1916: Major John Keating, W.T. Brown, John E. Pickering and Duncan Peer.

Photographs of Joseph's Canadian General Service medal are included with this record. The link to the Veteran Affairs Canadian General Service Medal website provided here, has a very complete description of the medal and provides brief information on the Fenian Raids. As it says, on the rim of the medal, Joseph's is inscribed, "Pte. J. E. Cullingworth, 20th Bn."
Notes
The band was first formed for the 20th Halton Battalion for July 1, 1867, Dominion Day. It became the Oakville Citizen's Band in 1881.

In 1881 permission was received to redesignate the 20th Halton Rifles as the 20th Halton Battalion Lorne Rifles, according to the Lorne Scots Regimental Museum, Brampton, Ontario.

The Canadian Almanac of 1897 has been scanned into the internet, and lists this information for the Battalion: Lt.-Colonel, Wm. Kerns(Burling-
ton). Majors, W.P. Appelbe (Stewartown,Halton)&nA
G. S Goodwillie (Georgetown).

and Bt. Major, Wm. Panton. Pai/master, J. R. Barber.
Adjutant, Bt. Major T. W. Fox. Qr. Mr., Lachlan
Grant. Sur i. Majors, Clarkson Freeman, M.D., and
Milton McCrimmon, M.D.
Inscriptions
On the photograph of the battalian: An arrow in ink points to Capt. J.E. Cullingworth and his name and rank are printed in ink on the grass below his feet.

On the medal: around the edge is engraved, Pte. J. E. Cullingworth, 20th Bn.
On the bar of the medal: Fenian Raid 1866.
On the face of the medal, around the head of Queen Victoria, "Victoria Regina et Imperatrix", and the medallian maker's initials, "T.B".
On the back of the medal: "Canada" at the top.
Publisher
A.A. Gray & Co
Place of Publication
Toronto
Dimensions
Width: 30 cm
Height: 25 cm 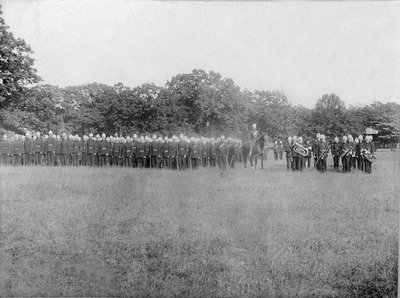 Comment on this item Full Image
Groups of Related Records