With an academic scholarship worth $20,000 US under her belt, it would have seemed natural if Carly Lepp had set her sights on some big-time university.

That's been the pattern, after all, for many bright Northwestern Ontario teens who have ended up flocking to major cities in pursuit of a degree or high-paying job.

It's one of the main reasons the North is suffering from a serious decline in its population.

But the 17-year-old Lepp, who lives on Lake Superior in the picturesque village of Rossport about a 90-minute drive east of Thunder Bay, is staying firmly in the Canadian Shield.

Lepp's decision to attend Thunder Bay's lesser-known Lakehead University is a surprise, considering she likely would have been accepted at a more distinguished school like the University of Toronto.

"But I don't think I could stand the thought of driving two hours just to go for a swim," Lepp remarked recently while surrounded by computers at Lake Superior High School's library in Terrace Bay.

Lepp wants to stay in Northern Ontario because she likes the lifestyle.

She also wants to be a doctor, something that became possible to do locally when LU partnered with Sudbury's Laurentian University to form the new Northern Ontario Medical School.

The chances of Lepp putting her medical degree to use in the North are good, given the region's chronic doctor shortage.

The outlook is currently less bright for graduates in other science-related fields, who may still have to move away from Northern Ontario to find a job.

"And once they leave, there's not a chance they'll come back," notes consultant Cynthia Clarke.

That situation could change for the better if Thunder Bay is successful in developing a biotechnology sector, still in its early stages.

While traditional resource industries like pulp and lumber mills have reduced their workforces in recent years, a skilled labour shortage s expected to emerge at the end of the decade, possibly creating opportunities for fresh graduates.

"The majority of our students are from Northwestern Ontario and would like to remain here, if they could," said Bob Griffiths, manager of Confederations College's career services department.

Rossport's Carly Lepp plans to become a doctor and work in Northern Ontario. 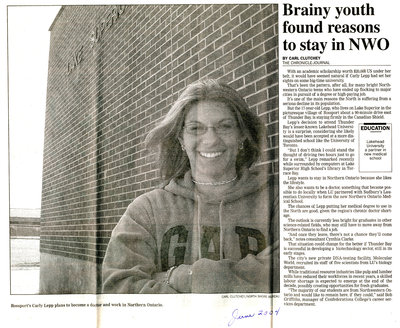