Mystery Question
When were these notes written?
[Please answer by clicking on the Comments tab]
Creator
E. Cameron, Author
Media Type
Text
Item Type
Documents
Description
This one page of document which appears to be amassed by Edith Cameron regarding the early history and development of Algoma Mills, Thessalon, and Nesterville.

As many as six passenger trains arrived daily in the early days of the Canadian Pacific Railway. In its earliest days, Algoma Mills had an immigration and customs officer, a post office, three general stores, a bakery and two hotels with a population twice that of Blind River, the nearest town. The complete complex of Algoma Mills changed in 1910 when the Canadian Pacific Railway moved its coaling facilities to Byng Inlet, later changed to Britt. During the intervening years, it has settled down to a quiet and peaceful village.

Nathanial Dyment was the founder of the town of Thessalon, and his mill established there in 1877, was the second on the north shore. Mr. Dyment came from Barrie where he maintained a mill and a lumber yard. He recognised the potential of locating at Thessalon, and so bought the Township of Kirkwood from the McArthur Bros. who were square timber operators, in 1887. In the same year, he purchased 300 acres on the east side and at the mouth of the Thessalon River, from the Department of Indian Affairs, for a mill and townsite. The west bank of the river and Thessalon Point were still Indian land. The name "Thessalon" is reported to be an English corruption of the Ojibway word "Tessalon" describing the long point".

The mill site was cleared and a mill was erected to saw about 40,000-feet per day. It operated during the summer of 1878, the second oldest mill on the north shore.

By 1884, there were about 200 permanent residents at Thessalon. There were 18 houses, 8 shacks, a general store, a hotel, two churches and a one-room school. Mail came by boat during the summer, and by dog team in the winter.

The Soo extension of the Canadian Pacific Railway was built in 1887, but most of the commerce was carried, by water, as about 14 boats docked there per week during the navigation season.

The year 1888 was almost disastrous for Thessalon. The Algoma Advocate, a weekly newspaper which was started the previous year, tells of the rapid growth of the community, of settlers pouring in, and also of the terrible forest fires. The paper of July 20, 1888, mentions a very bad fire which started in the Desert (probably Kirkwood), and burned very furiously. At other points, fire threatened the new railway and both trains and boats were delayed by dense smoke which covered the whole area.

About September 1, the Dyment sawmill was destroyed by fire starting in or near the boiler room. Mr. Dyment immediately ordered the erection of a new and larger mill, and most of the construction was done that same Fall. In the same year, 1888, the town was surveyed into lots and the first permanent bridge was built across the Thessalon River.

The village was named after Frank Nester, who, with R. Bishop of Thessalon Lumber Company, bought up land on McBeth Bay, Lake Huron. They built a large sawmill on the site and commenced operating in May, 1907. This was once an active community with the sawmill working night and day shifts. 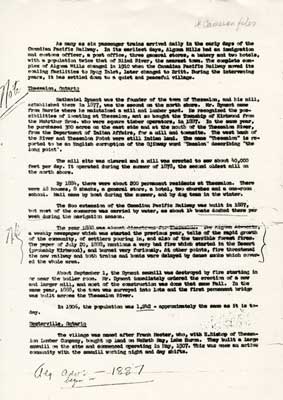