The splendid thoroughbred that carried the name of Thessalon into the King's Plate record book as winner of the race in 1903, was not only owned by a Dyment, he was also trained by a Dyment.

Harold Dyment of Toronto, family historian, has added some information about the family and their involvement in racing to the story run in Sault Star, January 9.

Nathaniel Dyment, who founded the town of Thessalon about 1783 with the establishment there of a lumber mill, finally won the Plate in 1903 with Thessalon after a decade of trying. The trainer was John Dyment, Nathaniel's grandnephew and a brother of Harold, Harold wrote: "My father, John Dyment 1853-1916, bought his first thoroughbred about 1875 and shortly thereafter formed what was known as "the Orkney stock farm", Orkney being 20 miles northwest of Hamilton, Ont. He continued breeding thoroughbreds until about 1903 when he disposed of his stock."

In one of the obituaries marking his death, it was written about Johnny: "As an owner and trainer of one of the chief Canadian racing establishments, he had compassed the whole country, earning the highest possible respect in a world in which men are inevitably recognized for their true worth. "... As a lad he rode races for his father's Orkney Stable with a fair amount of good fortune, and when the late Nathaniel Dyment went into racing in the thorough manner in which he transacted all his affairs John took charge of the Brookdale farm horses. He scored many triumphs and won all the great events of the Canadian turf in addition to important races across the line .... Carrying the orange and green jacket, Thessalon and Nesto were first and second in the Plate of 1903 and repeated in the following year with Sapper.

"He died just at a period when the horses in his care seemed ready to repeat triumphs and even surpass the past successes... Several years ago extensive purchases of the most fashionably bred mares were made, the breeding establishment was entirely restored and Red Fox, the only son of Flying Fox in North America was imported."

On Albert Dyment, his second cousin, Harold Dyment wrote: "Uncle Nat's son, Albert E., lived in Thessalon for a number of years, and as a young man managed his father's lumber business there (Mickle-Dyment Lumber Co.). He became the M.P. for the district of Algoma for years and it is for him the town of Dyment was named (Dyment Ont. is a small town near Dryden.)

Dyment (Diamond) Lake was named for my brother Philip who was president of the family corporation Dyment Mining and Investments.

Dyment Limited, Toronto, of which Harold Dyment was president, does mounting, finishing, die cutting, coating and converting of paper and paperboard. It has plants in Toronto, Montreal, Cleveland, Cincinnati, St. Louis, Chicago.

Media Type
Text
Item Type
Clippings
Description
This is a newspaper clipping of an article that appeared in the Sault Daily Star, Tuesday, Jan. 16, 1973. In it, Harold Dyment of Toronto, shares information with the unknown writer regarding John Dyment, nephew of Nathanial Dyment and family stable horse trainer.

The article also discusses Albert Dyment, Nathanial's son. Albert was involved with the family stables in addition to logging, and other businesses.

Notes
The article shares the fact that the family stable was called Brookdale and was located in Barrie. 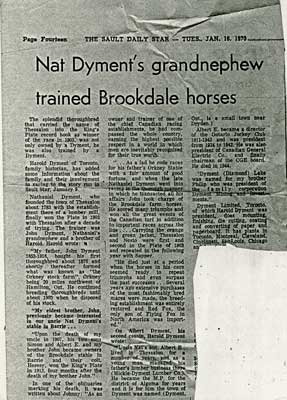