Station landmark dating back to 1910 to be razed

THESSALON — When the Canadian Pacific Railway disposes of Thessalon Station it will be the final chapter in the life of the "steel highway" as it pertained to this community.

Many people will peer into the past and recall with nostalgia the days when there was "a steamer comin' down the tracks" - for that was part of the thrill of going on a trip by the then most popular mode of travel. As a matter of fact, people often walked out to the station just to see the trains go through.

Thessalon Station is a landmark dating back to around 1910. Previous to that time there was a station at Sherwood, where Midway Lumber Mill is now located. Many of the older people In the area recall when the latter station was in use.

Goldie McCrea of Livingstone Creek recalls going to Sherwood Station with his father with a team and wagon.

"I was about 14 years old then and I can remember that a lot of people were getting on the train to go to a July 12 celebration in the Sault. Thessalon Station wasn't built then." (around 1905).

Sam Mortimore, who lives near Thessalon Station, recalls playing in the basement part of the station when it was being built.

"I was about four years old then and remember hustling out of there with a bunch of kids by having to run up a board.

"It used to be a busy place for many years, with four passenger trains a day. two going up at 11 a.m. and 1:30 p.m. and back down again in late afternoon and early evening. There were numerous freight trains travelling up and down," Mr. Mortimore said.

It is a well known fact, of course, that until transports came on the scene, freight was sent by train or boat. For a long lime the highways were barely fit for cars to travel on, let alone trucks.

Passengers in the early days were taken to the train by sleigh in the winter and three-seated democrats in the summer. Mrs. Alf Shaw of Thessalon remembers the days when a Mr. Glancey took the the passengers out in his 'bus-sleigh to the station.

"He had long red whiskers and they used to blow in the breeze. Then Johnny Jackson came on the scene with his team of drivers and sleigh. Everybody used to enjoy those rides," she recalled.

Mrs. Sam Gordon, the former Enid King and a well known teacher back in the early days, is just one of the many who now say, "I have had many wonderful trips on the train."

Unlike today, train rides later became more or less commonplace to children. It was always exciting, though, to hear the clanging of the bell, the shrill whistle and then the rush of the train amidst a cloud of steam as it moved up to the station platform.

"All Aboard!," was an equally exciting accompaniment to being helped up the steps and on to the train.

Just as exciting too, was buying the ticket Some of the station agents were at this station for many years. Perhaps one of the best remembered is the late Rollie Young. Always full of fun and zip, Mr. Young made your visit to the station a memorable one - and he wasn't above playing a few tricks on you either, as this writer can, for one, testify.

As a matter of fact, most station agents are remembered as "jolly people.'

Some of the agents remembered by those in this area are: Harry King who was there for many years, Mr. Young, William Somers, Ross Hales, Nelson Morris, George Porter, Dick Mills and the last one to live at the station - Jim Morrisette.

A spur was first put into Thessalon for the smelter, a cement structure whose ruins may still be seen.

An Algoma Advocate of Nov. 4. 1919 tells of the CPR enlarging the yards and building extra switches.

The spur into town was in operation in 1920 on account of the box factory and the sawmills.

Thessalon Station figures in a lot of the memories of the old days and many stories could be told.

Mystery Question
Where was Thessalon Station located? Where was the spur line into town located?
[Please answer by clicking on the Comments tab]
Creator
Edith Cameron, Author
Media Type
Text
Image
Item Type
Clippings
Description
This is a newspaper clipping that shares information about some of this history of the railroad in Thessalon.

It highlights rail travel and personnel involved in the area and the impending decommissioning of the Thessalon Station. A photo above the text shows the station. 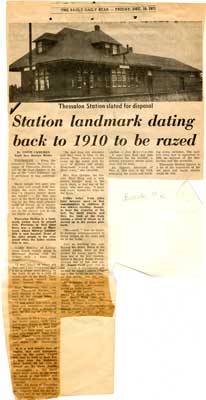