BELANGER, Conrad Daniel — Passed away on March 29, 2005, at the age of 77 years, surrounded by his loving family, after a short illness. Predeceased by his parents Zephir and Alice Ranger, and adopted parents Henri and Eva Belanger. Beloved husband of Lorette (nee Poirier) and dear father to Enide (Lloyd Brazeau), Pembroke, Paulette (Larry Bangs), Mattawa, Daniel (Shirley) Mattawa, and Michael (Sue), Mattawa. Grandfather to Christopher and Mark Brazeau, Jennifer Anderson and Scott Bangs, Cody and Brent Belanger. Great-grandfather to Logan, Alec, Austin and Maddison. Conrad is also survived by two sisters and one brother; Maria Hochon of Sudbury, Colombe Buritte of Mattawa and Abel Ranger of Mattawa. He will be missed by all. He was predeceased by sister Clareine and seven brothers, Andre, Luke, Lucien, Rhaul, Guy, Albert and Gilles. Conrad was a 4th degree member of the Knights of Columbus and an Active member in the Mattawa Golden Age Club. Service will be held at a later date at Ste. Anne Church. At Conrad's request, their will be no visitation. Donations to the charity of your choice and may be left with the T.L. Smith Funeral Home. 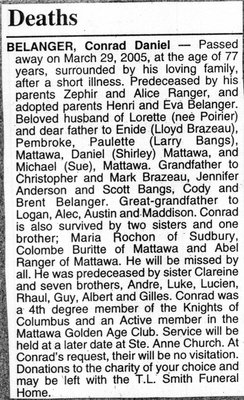