GENDRON, Claudia (nee Gravelle) — Of Mattawa, passed away at the Mattawa General Hospital on Tuesday, February 8th, 2005 in her 80th year. She is survived by her son Guy (Claudette) of Mattawa; her beloved grandchildren; Eric (Candace) of Sturaeon Falls, Marc, Tanya, and Natalie, all of Mattawa. Sadly missed by her great-grandchildren Emilie, Benjamin, and Mariève. Also survived by her brothers Ronald (Estelle) Gravelle of Hamilton, Edgar of Alberta and sister Laurette Downey (Roland) of Mattawa. Predeceased by her beloved husband Ray Gendron (1984) and her infant daughter Marie-Lou (1949), her father and mother Edmond Gravelle and Cecilia Aubin, her brothers and sisters Zenon, Leo, Lionel, Aldege, Geneva, Beatrice and Denis. Friends and relatives may call at the T.L. Smith Funeral Home, Mattawa on Friday, February 11th, 2005 from 2 to 4 and 7 to 9 p.m. Mass of Christian Burial will be celebrated at St. Anne's Church, Mattawa, on Saturday, February 12th, 2005 at 11 a.m. Spring interment in the family plot of the parish cemetery. Donations to the Mattawa General Hospital would be appreciated as expressions of sympathy. 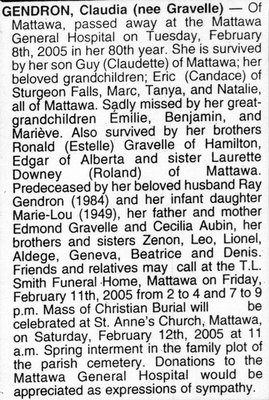