I am addressing my letter this way because I received Pearl’s nice, newsy letter this week and want to show my appreciation of it. So any message you may find in this letter you may both take it to heart. It is a nice afternoon that we are experiencing to-day. There are clouds but they are so thin that the sun easily sends its glimmer through them; and the cool weather, which we have now had for a long time, is moderating, and though the wind blows outside, our house is for once comfortable and warm. The snow is almost all gone glimmering. It is only here and there in spots where it had been unusually deep that you can discover its “last tracks”. Maybe we won’t get any more now till the melancholy days of autumn return again. Frederick is busy this p.m. digging up the arc in front of our house in which to plant flowers – things of beauty and joys forever, as it were. I haven’t missed a morning so far since I began in taking my morning swim in the lake. A curious thing about it this year was that the ice went out of the lake on the same day this spring as last, namely the 16th of April. The only difference is that last year it went out in the night, while this year it went out in the afternoon, thus exhibiting a return to conservatism. It is the modern young people who like to go out at night and stay out till the wee hours of the morning, as you know. We older fellows of more experience prefer to do our going out in the day. Last night Arthur started off on his momentous trip for Arnprior, where he is preach to-morrow with the hope of receiving a call. As he is a good speaker and takes well wherever he goes, both in England and in German, I don’t think that there is any doubt but that he will come back with a call in his pocket or at least in his possession. Arnprior is about 400 miles from here being some 50 miles north of Ottawa. If he arrived on scheduled time, he reached Ottawa this morning, and will spend about a

half a day there before moving out to his final destination. Herman, and Walter Hamm and wife with whom Herman is staying, will no doubt give him a hearty welcome and make him feel very much at home. Separation, they say, diminishes not, but rather increases the ties that bind. I was sorry to hear through Pearl’s letter of the death of my dear old friend Judge Cline, although knowing his feeble frame as I did, I was expecting it. Meda and Tom are still “off-duty”. Meda received a reply from her Saskatoon application to the effect that they could not possibly pay a salary commensurate with her high attainments and exalted qualifications as set forth in the testimonials she had forwarded. Tom also was just as unlucky, receiving word from Ottawa that there were at present no vacancies in the sphere for which he applied, but that his name would be kept on the records for future reference should occasion arise. I think this was just a polite way of turning him down on account of his age. Meda is now contemplating going to New York to live with Donald a while and see if she can’t land something down there; but I don’t think she will start off before some time next month. Their stay with us has been very pleasant and enjoyable on both sides; and we will miss them when they are gone; and after Arthur’s departure we will be left with only one boy in the house. Bees swarm, and so do families, as I needn’t tell you, seeing you know it from experience. I am glad to say that in the midst of a warring world and all the turmoil of these troublous times, we here in our homestead are living in peace and quietness; and I trust that you are all enjoying similar blessings. Our seminary year is nearing its end. lectures will close May 4th, then will follow “dead week” or week of cramming, and then the finals. Closing will take place on May 26th. After that will come synod, June 11th flg., and then the long vacation. But I must close. With love to you, one and all, and all good wishes. 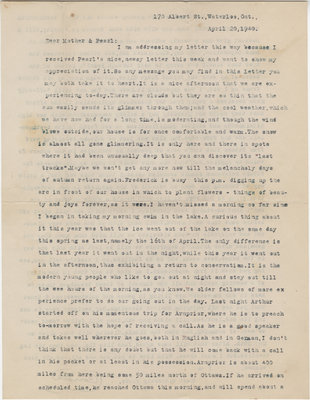