If this letter doesn’t get off on the eagle-winged train and reach you around the first instead of the middle of the week, don’t blame me, but put the blame on the lesser Littles, to whom it belongs because they don’t start their letters in time. We are having a lovely day to-day: it is nice and bright and sunshiny, and the freshly fallen snow sheds a radiant lustre on all the earth below. And yet it is not too cold – not as cold, for instance, as it was down your way when Pearl wrote your letter. Our thermometer, instead of standing around the dozen above zero has been standing fairly steadily around the score above. Just to show you how nice and warm it is up here, I herewith inform you that I was out for my swim early this morning, which was the 11th swim in the month of January, which I think is an all-time record for me as far as this first month in the year is concerned. The prospects are thst I will get in to-morrow yet; and in case I do, that will make up for all the days I missed in December on account of the impenetrable or impassable depth of the snow. While we have several inches of snow now, it is lying on a level and looks like a great white sheet covering the ugly nakedness of the ground. Just now as I glanced up from my typewriter I saw a big black squirrel running along the telephone wires as securely and as gracefully as if it had been running on the broad, broad ground. It was a sight for sore eyes. This is also the case with the grey squirrel that comes even into the house and eats the goobers out of Bonnie’s hand or lap. I don’t think you have any so tame down in the Carolinas; but up here nobody shoots them and nobody eats them: they say that they are ratite animals, and that they would just as soon eat rats. This morning when I was down in the bushes I saw a pheasant, a large partridge with a long sleek tail. It was quite shy, but wobbled gracefully away till it was lost to sight in the underbrush. This morning we received a letter from Robert, and learned to our astonishment that he had been suddenly transferred from Toronto to Chatham, which is some 140 odd miles west of

here, and about 65 miles from London, which is about midway between London and Windsor, Windsor being the next door neighbour to Detroit which lies in the state of Michigan, if I have my geography straight. He doesn’t like his transfer, and will not be able to get home for the week-ends any more; and he says that he will jump at the first opportunity to get out of the banking system. However, he says he thinks he will hold on until after his three or four months military training is over; at which time he hopes to have a little money saved up with which to carry him over until he gets a new job. But I think he had better stay in the bank until he lands a permanent job elsewhere, as otherwise he would be one of the first to be drafted into the army, which most likely will prove more unpleasant even than banking, especially if they should be sent across the waters to be butchered up on the high seas or in Europe. The cost of living is already advancing; and as the war is prolonged it will advance more and more; and hard times are sure to be in the offing. It is all too bad, but we can’t help it, and it is up to us to make the best of it. In the College and Seminary we are starting the two-week long First Semestre Exams, beginning on Monday. After they are over we will enter the Second Semestre, or the homestretch of the present scholastic year. Tempus fugit, as old Dr. Fry use to say; and I am beginning to realise it more and more as I approach ever more closely to the threescore and ten mark. Just now I am on a sort of pre-lenten fast. I gave up smoking last Sunday and haven’t had a taste of tobacco since. I thought it would be for my good to abstain for a while; but as yet I haven’t set any limit as to how far the absention would go. So maybe the next time I write you I may be smoking again, and maybe not. Bonnie is still busy knitting socks for the soldiers, doing both her part and mind toward the winning of the war. But I have now reached my limit. Wishing you every blessing and health and happiness through the year that has just begun, I am, with love from us all, 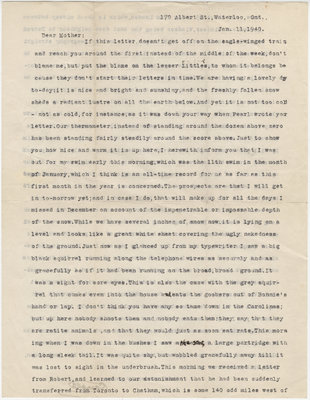