Creators
Little, Carroll Herman, Correspondent
Little, Candace
, Recipient
Media Type
Text
Item Type
Correspondence
Description
Handwritten letter from Carroll Herman Little to his mother, Candace Little, on February 16, 1936. Little describes family life with wife Bonnie and their children, and his work as a Lutheran pastor and faculty member at the Evangelical Lutheran Seminary of Canada in Waterloo, Ontario. In this letter, Little discusses the weather, the children's standing at school, the construction of Carolus' new house, plans for Herman's birthday, and a Seminary bowling party.
Notes
Carroll Herman Little (1872-1958) was a Lutheran pastor, and a professor and administrator at the Evangelical Lutheran Seminary of Canada (now Waterloo Lutheran Seminary) in Waterloo, Ontario.

Eileen got ahead of me, writing her letter last night and giving you all or at least the principal news, which doesn’t leave me much to say. But that doesn’t phase me, as I am sort of like Shakespeare and can “make much ado about nothing”. We were all, or to be more exact, the majority of us up to see Carolus’ new house a little while ago. The finishing process inside is coming along fine; and the house is going to be “a thing of beauty and a joy forever.” They are having a playroom in it in the basement. From the progress that is being made, I judge, it will be ready for occupation by the 29th, which is their moving day. The only unfortunate thing about this is that Carolus will be away and only Marge will be here to move in. But that may be a lucky break for him, as he will not have to help in moving, and when he comes back he will be already moved in. If he is a chip off the old block and doesn’t like moving any better than I do, he will count himself lucky. Aside from this point of view, Carolus was fortunate in getting the Montreal-Quebec hand-out. Two men from the office were considered for this

job – Carolus and the boss in his room – and Carolus won out. If he makes good, as he no doubt will, he may be in line for many similar expeditions in the future. Carolus had no wind of it and didn’t know the matter was brewing till it came to him suddenly like a bolt from the blue. To-day is cold again and it is steadily snowing, just as though we didn’t have enough snow! It is piled up outside like little mountains and has pretty nearly paralyzed all the bus and automobile traffic throughout the province. It has one advantage, however, and that is, if affords the children a lot of fun. Florence and Frederick, e.g., are very happy over the winter. Speaking of Florence reminds me of a valentine episode. The children got lots of them in school and Florence got one that she particularly prized. It was from Billy McKersie and read something like this, “I love you – no fooling.” Florence who likes Billy very well, said, “I only hope he does.” Frederick also has a girl, whose name is Betty Skelton. He received a valentine from her, which he likewise prizes. The other day he wanted me to show him in the Bible where it says Methuselah was 969 years old, and when I read Gen. 5:27 to him, he said, “That’s a funny way to put it.” Nothing escapes his sharp notice. He is a good speller and tells me he has made only three mistakes in spelling since the school began this year – which I think is a very good record. Ruth is the only one of the children that is making a bad record. She stands last in her class of 56 and her average is not more than 25 or 30. She is a genius when it comes

to drawing and painting; and it’s a pity we can’t give her special courses along that line, but she is no good in the ordinary high school studies. She is excellent in doing housework and cooking – probably the best in the family. But she will surely have to take this year over in High School. I am plodding her on as well as I can, but she doesn’t take much interest in her school work. In this respect she is different from all the others. This coming week promises to be an eventful one for us. Herman’s birthday comes on the 17th and his colleagues in the Warehouse are going to throw him a beer party in our house that night, in which we are all cordially invited to celebrate. Then on Friday night the Seminarians are treating themselves and their professors to a bowling party in Kitchener. After this is over they are coming here to our place for the eats and smokes and whatever other good things they can get. They are expecting a good time. May they not be disappointed! Prof. Henkel, who has a hard time to get around this winter, remarked to me the other day “I think the snow is an awful thing.” I said to him, “I do too when I have to shovel it.” And I have had a lot of it to do this winter to help him to a passage to the seminary. It looks as though I will have to be at it again to-morrow morning bright and early. But I must close. With all good wishes and love, I am

Most Sincerely yours, [signed] Carroll 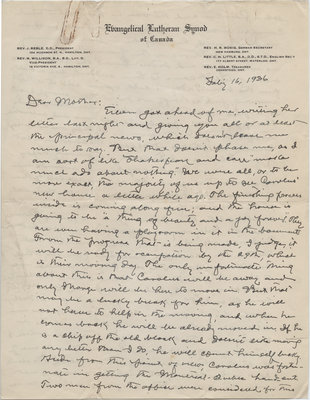