Your very interesting and highly appreciated letter was received a few days ago, and was much enjoyed. I have just got back from Hespeler where I preached this morning, and have had my dinner and a glass of wine, and am now ready to give you a few lines again. There isn’t much to write about except the hot, dry weather, which has become an old story. It is hard on the gardens and particularly the corn. I think the ears will be small this year and not so many of them. But we will probably have enough as I planted a big patch. We have had beans in great quantities nearly every day, though they also are now beginning to fall off in quantity. The farmers are in the midst of harvest. Grain appears to be quite good this year, though some of it is short in the straw. I didn’t do much this last week, except to work out a little exequies of the N. T. for next years course, and get up my sermon for to-day. I had a very-good congregation out at Hespeler this morning. I button holed one man and got a new subscriber

for my book. I haven’t heard anything from the publishers since I wrote you last week but should have a letter by to-morrow. It was too bad in a way that I was not called upon to send my money over earlier as the Canadian dollar seems to be losing in value as compared with the American dollar. The discount on it was 7 ½¢ yesterday, just about half what it was when you sent me the the hundred dollars. At one time not so long ago the discount was less than 4¢. I hope it will not go any lower anyway till I get my money across. We haven’t received our salary for June yet and now August is almost here. I don’t know whether the merchants will want to carry us much longer; and one rather hates to order things anymore. Dr. Schorten’s daughter and son-in-law from New York are still here, but are leaving to-morrow afternoon. Prof. Sandrock’s children, children-in-law, and grandchildren are still here to the number of 12, but will also be leaving Monday. Dr. Clausen and wife are spending the week end at Sauble Beach on Lake Huron with friends from Waterloo who have a cottage there. I take a swim on the lake everyday, which is the extent of my vacation. I wish Bonnie could get away somewhere for a rest, as she is pretty well worn-out and needs rest badly. She weighed the other day and weighed 128 ¼. She thought she was slipping back as she had lost a half pound since she last weighed. I told her that that was

not surprising in the summer time and in the heat; that I had lost three or four lbs. in the same period and didn’t think anything of it. Tell Evangeline that Frederick still remembers her and always speaks of her as his ‘big cousin’. He said to me the other day, “I think my big cousin will come back again next summer, don’t you?” I almost hesitate to tell what follows for fear it will make Evangeline excessively proud, but he said one day “I think I like my big cousin better than I do Father.” But, if you do tell her this, you might add that in expressing such sentiment he was only teasing me. He is a great tease anyway and besides, wherever he gets it from, has a special fancy for females. We were rather surprised to hear that Jennie Lee had got back home so soon from the “Century of Progress” exhibition. We are like the Scotchman, who when his son broached the subject of going, said, “no, son, we postpone it until the next one.” Carolus and Marguerite and another couple went out to Devil’s hill to camp under the shade of the trees for the rest of the day. Marguerite had on shorts and was a sight for sore eyes. Howey was here this afternoon. I think they are now down in the park. He waits out on her religiously. That exchange of homes was quite a scheme on the part of the Hendersons; and might work well in other cases. Some

women writers in the Homemakers Department of the Globe offered to exchange houses for a short period with city dwellers; but when they told of all the work the city folks would have to do, the latter backed out unceremoniously and did not bite. Dr. and Mrs. Maurer left last week for their vacation in Morrisburg. They will be away throughout the month of August. But I think I will have to close here as it is just about time for me to go down for a swim and get cooled off a bit. All join me in sending love and all good wishes. 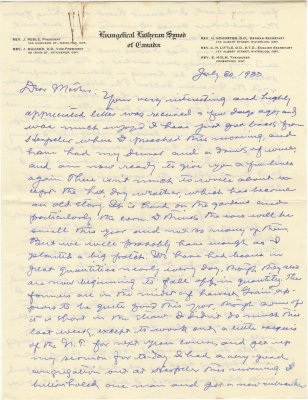