Creators
Little, Carroll Herman, Correspondent
Little, Candace
, Recipient
Media Type
Text
Item Type
Correspondence
Description
Handwritten letter from Carroll Herman Little to his mother, Candace Little, on July 9, 1933. Little describes family life with wife Bonnie and their children, and his work as a Lutheran pastor and faculty member at the Evangelical Lutheran Seminary of Canada in Waterloo, Ontario. In this letter, Little discusses his personal financial struggles during the depression, and budgetary problems at the Seminary. He also discusses his work on the synod minutes, the annual tattoo in Waterloo Park, and a beach vacation taken by Herman, Marion, and Howard. This letter includes a clipping from The Record.
Notes
Carroll Herman Little (1872-1958) was a Lutheran pastor, and a professor and administrator at the Evangelical Lutheran Seminary of Canada (now Waterloo Lutheran Seminary) in Waterloo, Ontario.

Enclosed I am sending you Eileen’s letter and a piece that appearing in the Record, Kitchener the early part of the week. I thought you would enjoy the ‘nitwit’ of the composition. I will try to add a few lines this afternoon to make up for any deficiency, of which you otherwise be more or less conscious. The clipping in question expresses my sentiments exactly, particularly the last few lines of it. You might show it to Lillian, who, being a schoolmarm and so also a nature lover, might appreciate it also.

I preached in Bridgeport this morning, replenishing my vacuous purse by $4.65, after all expenses were paid. This was a great help in keeping my spirits up, as I had fallen very low, not having received my salary for last month and being on the very verge of bankruptcy. I was down yesterday to Kitchener for an interview with our treasurer, Mr. A. L. Bitzer. But that lawyer gave me very little satisfaction beyond giving me a dollar for my forthcoming book. He said, “There is no money coming in, and I can’t pay you anything when I don’t have it.” And worst of all he didn’t think he would have any money soon, or before the mission or Reformation festivals are held in the parishes, which will not be much before fall.

So at present it looks like a financial famine. I don’t think our institution was ever in as sorry a predicament as at present, and I don’t know when or how we are going to get out of it. I haven’t heard from my publishers since before synod, and I don’t know how they are getting along with my book; but I hope that it will not be out much behind time. In the meantime I have got a few more subscriptions here and there should be by this time a good many more sent in direct to the company from the States. I have been very busy the past week getting out the minutes of synod, proofreading the copy for the printed book and transcribing the minutes in the protocol. But it is all done now. The minutes are printed and some of them already distributed and I wrote them all down by hand in the big ledger book – 97 pages. So you may imagine, I worked like a Trojan. We are having fine summer weather now – just enough rain to keep things growing, warm enough to keep from freezing and cool enough to keep from sweating. We have had these long messes of beans and peas out of the garden – the latter to-day. We ate our last strawberries of the season on Friday. They were abundant and delicious this year. Last night at the big tattoo the crowd was estimated at 36 000 – the largest ever. I didn’t go down, except in the afternoon for a swim, preferring to view it from a comfortable distance. The fire-works resembled the thunder of a battle. Prof. Henkel has been assured by the over-generous insurance company that they will rebuild his barn, on the grounds, I suppose, that they regarded his Frau as an irresponsible person. I think in the long run he would have been better off if he had received no insurance

and had gotten out of the farming business. But he has missed his one and only chance unless the new oil stove which Mrs. Henkel bought yesterday gets in its nefarious work again. Marion and Howey and Herman (the latter as Chaperon) left this morning for a vacation stay of a week at Wasauga (not Watauga) beach on the Georgian bay of Lake Huron. They are anticipating a gay time bathing and basking in the sun or in the lake, as the case may be, in their beach pajamas and other more or less perilous rigs. Carolus gets a letter from his Marguerite almost every day, sometimes written with pen and ink, but most often with pencil. The Clausens are expected back on Tuesday. We still have Miss “Tho” Neudoerffer with us; but she will be their guest upon their return. They tell me Prof. Sandrock has just called so I will close this rambling note and turn my attention to him. With love and all good wishes, I am 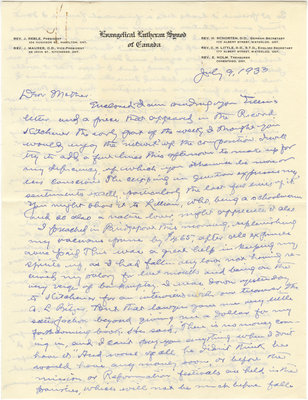