Since Eileen has written both to you and to Pearl, there probably isn’t much left for me to write about; but I will have to give you a few lines this afternoon anyway, if for no other reason than force of habit. I preached at Galt this morning and didn’t get back till half-past two or thereabouts. Then I had to eat my dinner, and being rather hungry, it was around the middle of the afternoon when that job was finished. I had a pretty good turn out at Galt and enjoyed preaching there this morning. Besides it netted me, clear of expenses, $4.40, much needed spending money. Eileen is sending you a cut of myself that appeared in Friday’s Toronto Star. I knew nothing about it till the picture appeared in the paper. It was probably taken from the picture in “Who is Who?” There was no comment with it – the least said the better. I had an invitation last week from the Rev. Dr. [?] of Charleston, S.C. to contribute a Mediation and Prayer on a subject assigned to appear in a devotional book to be published shortly by the U. L. C. A. Publication Board, Phil’a.

The book is to follow largely the lives of “God’s Message” of The Vis Publication Society, and will have a meditation and prayer for every day in the year contributed by 365 Lutheran ministers, of which I am an e pluribus unum. I am still making progress on the publication of “Disputed Doctrines.” The publishers offered to send me the prepared manuscript, which I am to look over and make necessary corrections. Then they will give me an estimate of the cost and the price at which the book is to sell. After that, I will circularize the Lutheran pastors of the U.S. and Canada and appeal for advance subscriptions, offering as an inducement a somewhat lower rate. I do not expect to make much money on the book, but hope that I will be able to more than cover the expenses. I had Mr. Binning, the photographer in Kitchener to make me a picture for a cut for the frontispiece. It was a real good picture, and he told Carolus the other day he was going to finish me up one gratis. This I intend to turn over as Bonnie for her birthday, May 19th. I began smoking again after Lent was over and have by this time become re-naturalized to it. I find it tends to help down obesity. I gained about 5 lbs. in weight during Lent and at its close weighed 174. Since resuming smoking I have lost 9 pounds, a loss which I can well stand. Dr. Zwick was around to-day to see Eileen and seemed, so they said, well-pleased with her progress. We had a quarantine card put on the house for whooping cough last week. The children didn’t whoop,

but the paroxisms of coughing in which they sometimes nearly choked made me think it was whooping cough, and I thought it only fair to report it to the health authorities, who at once imposed the card by which our front door is decorated. I was extravagant enough to buy me a pair of new shoes the other day. I almost had to do so, as the old ones, which I had worn steadily for the past two years needed soling, and I had no others to put on during the process. Now I have two pairs at once, and don’t know what to do. I think I will give the old pair to Herman. Carolus lost out in his application for the town job. It was given to a young fellow, a mere kid of 18 years at $500 a year. This would hardly have been worth while for Carolus anyway; but would have been better than nothing, which is all he has in view just now. I am giving Herman a job in digging the garden, for which I told him I would give him a dollar or so. I bought my first seeds and onions yesterday. It is still quite cool here and we keep the furnace going all of the time, and the trees haven’t as yet begun to bud. I’m afraid I will have to get in another ton of coal yet. Well I must bring my brief note to a close. With love and all good wishes,

As ever, Most Sincerely yours, 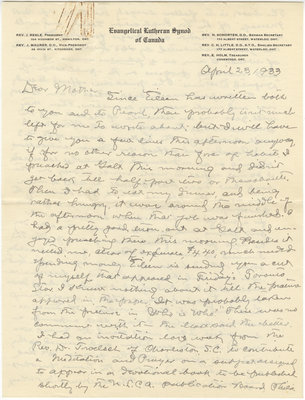