Creators
Little, Carroll Herman, Correspondent
Little, Candace
, Recipient
Media Type
Text
Item Type
Correspondence
Description
Handwritten letter from Carroll Herman Little to his mother, Candace Little, on January 8, 1933. Little describes family life with wife Bonnie and their children, and his work as a Lutheran pastor and faculty member at the Evangelical Lutheran Seminary of Canada in Waterloo, Ontario. In this letter, Little describes the effects of the Depression on the church in Bridgeport, and the Little family.
Notes
Carroll Herman Little (1872-1958) was a Lutheran pastor, and a professor and administrator at the Evangelical Lutheran Seminary of Canada (now Waterloo Lutheran Seminary) in Waterloo, Ontario.

Your nice, long and interesting letter was received a few days ago, and was read with much pleasure. I will endeavour is give you a few lines by way of reply to-day. I preached down at Bridgeport this morning and intended after service to hold the annual congregational meeting. But the attendance was small, there being only 22 present; and of these, there were only three voting members, only males 21 years of age and over being eligible to vote. So the meeting had to be postponed. The depression has hit the congregation rather hard, and financial contributions have fallen off to such an extent that the probabilities are that the services will soon have to be cut in half and that I will soon be preaching there only twice a month instead of every Sunday. We were glad to hear that you liked our group so well. I had it made largely on your account. We think the pictures are about as good as could be expected considering the material the photographer

had to work upon. We had a letter from Blanche, in which she went into ecstasies over it; also a formal note of thanks from Florence, in which she condescended to say that the pleasure was “nice.” Aside from these we have had no comment except from our ex-step mother, Mrs. J. B. DeLong, who spoke of it as a picture of “the royal family”, whatever that means. We were glad to hear that you had passed a pleasant Christmas and had entered upon the New Year in a fair state of health. “May you live long and prosper,” is our wish for you. I was sorry to hear of the passing of cousin Essie Jones. It was nice though in her boys to treat her so decently and give her so fine a burial. I should imagine Uncle Cephas would be pretty poorly by this time. He will probably not last much longer, and poor Aunt Dora’s days are also probably pretty nearly numbered. She hadn’t much to live for and it will doubtless prove a blessed release to her when she passes. In addition to Eileen’s letter enclosed, I am sending you one from Frederick. He talks every day of his grandmother and seems to thinks a great deal of you. He said I should send you his letter and see what you would say. He is so original about everything. The other day he got angry at Robert and he said, “I don’t like you: I wish you weren’t a member of this family.”

He told his mother as they were coming down the steps yesterday, “I love you, mother: I love you every day.” We started school Tuesday and are now well in the harness again. We will just teach this week and beginning with next week we will have two weeks of examinations for the first semester. The financial situation is getting worse instead of better. I, however, got my cheque for December last week. But I was the only one that got it. The U. L. C. A. in forms us that they will have to cut down their appropriation to all educational institutions. So we will get less there; and I don’t know how we will be able to get through the year. When I first presented my cheque at the bank, they refused to cash it, but did so the next day. The situation is precarious, and I do not know how soon it will be before we will have to apply to go on the ‘relief’; but we are all hoping for the best. I preached in our chapel on Friday an Epiphany sermonette, which went over quite nicely. I don’t think I have any more news, so I will close.

With love and all good wishes, I am 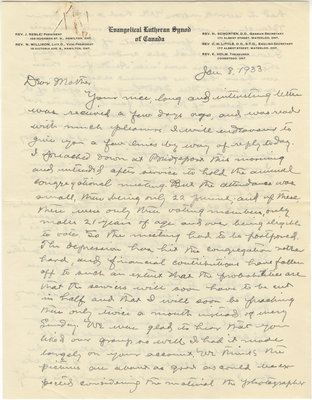