As this is Sunday afternoon again and bright and sunshiny and hot, I shall stay inside where it is a little cooler and fill in the time by writing you a few lines. Synod is over, for which I am duly thankful. It was a strenuous time. The first day or so went along fairly leisurely, and the men talked to hear themselves talk; but on the third and last day they rushed things through like lightning and adjourned on Friday night around 8 o’clock. As no provision was made for meals on Saturday, they just had to get through or starve. I was very tired when it was over, having scarcely had time to smoke, eat, or drink. So Dr. Schorten and I decided we wouldn’t begin work on our minutes until to-morrow. The synod elected a full delegation to the U.L.C.A. convention, but not a representative one. The nominating committee adopted as a rule that they would not send any man, with the exception of the president, who had attended the convention before. Consequently they put all new names on the slate, their view apparently was that this

is a picnic, and every fellow must be given a turn. I doubt if there is a man on the list who will open his mouth at the convention except to vote ‘aye’ or ‘no’. I say this from no personal disappointment, as I did not expect to get on this time. I was re-elected secretary and so also was Dr. Schorten. There were only scattering votes against either of us. There was a movement, however, to escheat us of our honoraria of $100 each, by a motion ‘requesting’ all recipients of ‘honoraria’ in view of the hard times, to return them to the Treasurer in whole or in part. I spoke to the synod very emphatically against the motion and closed with the statement that the synod had voted me an honorarium and I expected them to pay it. This settles the question and the motion was struck out of the report. A great deal of time was taken up with the financial affairs of the Seminary and College; and the synod passed a number of resolutions which if followed up, should relieve the situation somewhat. Dr. Willison was elected Vice- President of synod in place of Dr. Maurer, who refused to stand for re-election. I supported Dr. Willison for this position. I had an idea that if he was made vice-President his ambitions would be set in a different direction. My surmise was correct; for later on in the convention, he resigned from the seminary board. I imagine he thought his resignation

would not be accepted; but it was, and Pastor Schmieder was elected in his place. I will say, however, that Dr. Willison was on his good behavior during the past year, and made no trouble. I am thinking that when Dr. Neurdorffer learns of this, he will be sorry that he left Waterloo for India last year. I am sending you under separate cover a copy of the College Cord giving pictures of the graduates and other interesting matter about them. Herman was around Kitchener and Waterloo looking for a job, but found them as scarce as hens’ teeth. The only job he has had so far was cleaning our cellar for which he received one dollar. Carolus and Alvin Pauli, another graduate, have embarked in the picture developing business and have set up down street. Mr. Pauli furnishes the funds and Carolus, the brains of the undertaking. It is an experiment, and we hope the boys will make good with it. We have now regular connections with Toronto by air-plane; and as Toronto has regular service to and from Buffalo and New York City, it should be quite feasible for you, if you have the money, to fly from Washington to New York and then to Toronto and Waterloo. So we will be hoping for you to pay us a “flying

visit” sometime this summer. I expect to send Bonnie back to the hospital to be fixed up either this week or next, depending on the time I can arrange with the doctors. I don’t think she would need to stay there longer than a week at the outset, and I am in good hopes that she will be O.K. when her wound is sewed up and has healed. She is looking very well and has fattened up considerably, though I wouldn’t say that she weighs 178 lbs. yet. I kegged my first lot of wine (Dandelion) last week. It promises to be good stuff. I still have a little elderberry from last year and a few gallons of cider. But I must close. With love and all good wishes, 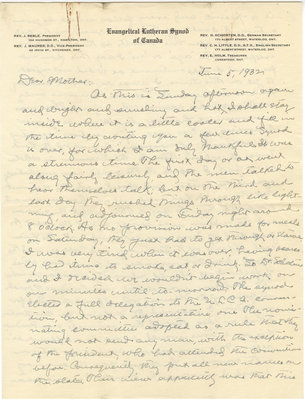