Additional edits handwritten in pencil by C. Mortimer Bezeau
Notes
William Lyon Mackenzie King (1874-1950) was Canada's longest serving Prime Minister with a total of 22 years (1921-1930 and 1935-1948). King was born in Berlin, Ontario (present day Kitchener) on December 17, 1874. He graduated from the University of Toronto and went on to study economics at Harvard and Chicago University. In 1900 King was named Canada's first Deputy Minister of Labour, and became Minister of Labour in 1909. In 1921 King was elected Prime Minster of Canada. King was a member of the Liberal Party of Parliament for over 30 years, 22 of those years were spent as Prime Minister of Canada. William Lyon Mackenzie King died on July 22, 1950 in Kingsmere, Quebec.

Another Christmas will soon be here; and soon too another year will have completed its course and belong to the historian.

The passing years tend to make one less impatient with the slow progress of things in general - particularly with the progress toward a fuller life and a better world in which to live. I share the view recently expressed by you that everything will come right in the end. While the day-to-day progress is imperceptible, when we look back to our boyhood days we are forced to the conclusion that we have covered a great deal of ground in the intervening years. Perhaps we are moving forward more rapidly than we now realize.

In this connection it is interesting to hear John Bracken preach the Liberal doctrine of freer trade as a means to world peace; still more interesting to speculate regarding the effect of such preaching on his political fortunes as leader of the Conservative Party; and equally interesting to read the Globe and Mail's attack on him this morning.

While we have made progress in the right direction along some lines we seem to have gone backward along others. Little did I think, when taking my first lessons in Liberal principles, that I would live long enough to see individual rights trampled upon by a Liberal government as evidenced by the recent spy probe; and the treatment of the Japanese in Canada. Had these things been done by a Tory government I could understand it, because I would not expect anything better. There has been some defense of the spy probe; but I have yet to find a person who would advance an argument to justify the treatment of the Japanese.

Nor did I think I would live to see a Canadian government, of any political stripe, outlaw a religious sect - an act that paved the way for the present persecution of the "Witnesses" in Quebec. What this sect could do to create hatred of Quebec in other provinces would be nothing compared to the fear and hatred of both Quebec and the R.C.Church now being created by the persecution of those people.

It is with pleasure I note your recent plea for unity in the Liberal Party; and I am wondering how that unity, which is so essential to survival, can be brought about. I am reminded of what Lincoln said: "No nation can long endure that is half free and

half slave." Nor can [^handwritten] a [^end handwritten] political party long endure that is half Liberal and half Tory. Unfortunately, here as elsewhere, outward profession is no proof of inward faith; and there is no way of knowing what a man's faith is until he has been tried in the fire of adversity, or in the glory of prosperity. During your years and mine, we have seen many professed Liberals fall by the wayside.

To make myself clear on all the points raised may I say, in conclusion, that one can scarcely imagine what the political harvest of the last decade would have been had any man other than yourself been leading the Government of Canada; and I dread to contemplate the future of the Liberal Party after it is deprived of your wise counsel and leadership.

My wife and family join with me in extending every good wish for your future health and happiness. 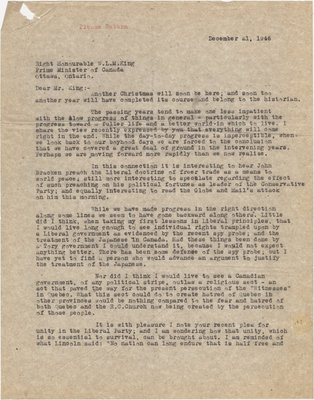