Creators
King, William Lyon Mackenzie, Recipient
Bezeau, C. Mortimer
, Author
Media Type
Text
Item Type
Correspondence
Description
Typewritten letter from C. Mortimer Bezeau to William Lyon Mackenzie King on October 7, 1946. Bezeau informs King that he has sent another box of russet pears to Laurier House. He also shares with King his happiness that King will not be retiring from Liberal leadership.
Notes
William Lyon Mackenzie King (1874-1950) was Canada's longest serving Prime Minister with a total of 22 years (1921-1930 and 1935-1948). King was born in Berlin, Ontario (present day Kitchener) on December 17, 1874. He graduated from the University of Toronto and went on to study economics at Harvard and Chicago University. In 1900 King was named Canada's first Deputy Minister of Labour, and became Minister of Labour in 1909. In 1921 King was elected Prime Minster of Canada. King was a member of the Liberal Party of Parliament for over 30 years, 22 of those years were spent as Prime Minister of Canada. William Lyon Mackenzie King died on July 22, 1950 in Kingsmere, Quebec.

Today I have pleasure in sending to Laurier House a carton of russet pears which I, trust you will accept and enjoy.

I am happy to note a press report indicating a determination on your part not to relinquish leadership of the Liberal Party for some considerable time to come. You are the only link that binds a great many Liberals to the party as presently represented by Federal Government; and I am not optimistic regarding its future after your retirement.

The Government has a great deal to its credit, but there are many debits that cause dismay in the ranks of true Liberals; the most recent of which is the way the strike situation has been handled. Frankly I think the country has more to fear from certain labor leaders than it ever had to fear from persons who have recently been sent to prison for crimes against the state; and this view is [^handwritten]held[^end handwritten] by many Liberals, both in and out of the ranks of labor.

From what I can gather workers are for the most part greatly disturbed because of the power over the Government recently acquired by irresponsible labour leaders; and the blame for it is placed at the door of the Government. Few blame you personally; many blame Mitchell; but I do not blame either. Knowing something about how important matters are decided by the Government, and my knowledge of the matter ending there I am in the dark. But of one thing I am certain, and that is that conditions would have been worse under any other leader.

Canadian conditions appear to be but a reflection of world conditions. Bevin [^handwritten] Molotov [^end handwritten] and Byrnes jockeying for positions when the next war comes instead of trying to reach agreements regarding the causes of war and. removing them – such actions by supposedly super-men do not afford much hope for the future peace of the world.

I note with pleasure that you contemplate a visit to Kitchener at no distant date; and I hope to have the pleasure of meeting you at that time.

With kindest personal regards and best wishes, I remain as ever. 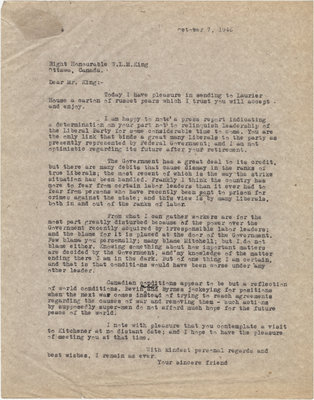