Today I am sending to you by Canadian National Express a small carton of russet pears which I trust you will accept and enjoy.

There is so much at this time about which one might write, but no one can be better informed than yourself regarding the more outstanding current events. However I would like to note that a movement is on foot to organize for the purpose of taking care of post war conditions. Having in mind the men who attempted to float the “Win the War League” a quarter century ago, as well as some other movements in past years, and having no definite information regarding the men behind the new movements, I cannot avoid the suspicion that the movement has for its object the defeat of the Liberal party, and the perpetuation of the economic system which, twice within your life time and mine, has been the primary cause of the world being set on fire.

It is not pleasant to think that while one political party is putting forth every possible effort to stem the tide of destruction which is sweeping over the earth another group of men should be fostering a movement to continue a system which is largely responsible for the present world upheaval.

Within your memory and mine the Liberal party has fought many strenuous battles in defense of right, and truth and justice; but I predict that when the international conflict is ended the Liberal party will be faced with a task vastly greater and much more important to the welfare of humanity than any it has heretofore known. 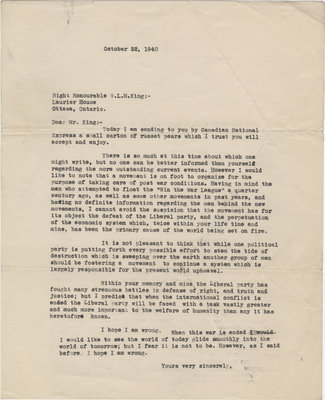