Creators
King, William Lyon Mackenzie, Author
Bezeau, C. Mortimer
, Recipient
Media Type
Text
Item Type
Correspondence
Description
Typewritten letter from William Lyon Mackenzie King to C. Mortimer Bezeau on November 3, 1931. King thanks Bezeau for the box of russet pears and the compliments on his speech in London. King hopes that Bezeau is enjoying his duties as mayor and that he regrets that the city is no longer named Berlin.

I have been a long time in writing to thank you for the box of russet pears which arrived at Laurier House some weeks ago. I was busy at the moment preparing material for the London speech, and since that date have been travelling about so much and so occupied with a number of pressing engagements, that I have had little or no chance for correspondence.

In the interval, your letter of October 22nd has also been received. May I now thank you for both. The pears, I am happy to say, are still in evidence, although, with the exception of a day or two, I have been enjoying them ever since the box was received. I have never tasted more delicious fruit, and I have had the same verdict from those with whom I have had the privilege of sharing your gift. It

was really very kind of you to have permitted me to share so large a portion of your harvest of the present year.

I am glad you like what I said at London. I expect there are a good many who would prefer that I had made no allusion whatever to Beauharnois. Personally, I deemed it all-important that the true position of that situation, deplorable in some particulars, but admirable in others, should be fully known. I also feel that out of it from now on we should find a better way of dealing with party organization. With this in mind, I spoke as I did.

I am inclined to view the Sifton outburst as anything but misfortune. It was sure to come sooner or later, as Sifton resented very strongly the failure of himself and other members of his family to obtain a renewal of the Georgian Bay charter at the time the late Liberal Administration was in power. His action is so transparent that I doubt if he has done harm to anyone but himself.

I hope all is going well with you, and that you continue to enjoy your official duties as Mayor of the city of my birth. Personally, I never cease to regret that its name does not continue to

be that which rightfully belongs to it, which is the only name that could [have] [been] known to its founders and [^handwritten] so [^end handwritten] many of those who have since passed away.

With kindest regards and all good wishes,

Believe me, as always, 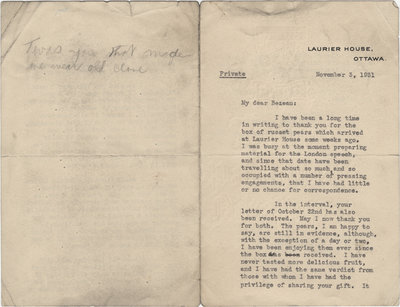